In order to achieve this, engineers and technicians from the company have improved the efficiency of the hydraulics.

The CO2 neutral RUF Maschinenbau GmbH & Co. KG from Zaisertshofen have redefined their own benchmark for a positive energy balance and have increased the efficiency of the modern RUF briquetting systems for wood and biomass. As a result, the energy consumption of these RUF briquetting series has been reduced markedly while simultaneously the productivity has been increased.

A comparison between the new RUF LIGNUM R4, which is designed for wood chips and sawdust, with the similarly named predecessor shines a light on exactly which improvements have been achieved to date.

The predecessor R4, with its 37 kW motor pressed 600 briquettes per hour. At the same mechanical settings, using the same material and an identical briquette density, the optimised LIGNUM R4, with its low consumption 30 kW motor, produces 685 briquettes per hour. The energy consumption per briquette lies therefore at a level 25 percent below the predecessor and the productivity is roughly 15 percent higher.

According to Ruf, the decisive factors behind these improvements are diverse optimisations on the hydraulics. They have been able to reduce the resistance and the heat build-up in the system, as well as significantly improving the oil flow. 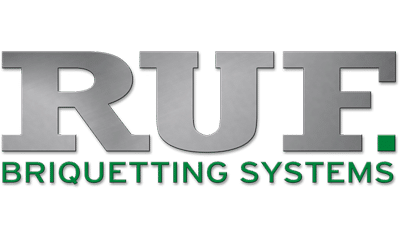