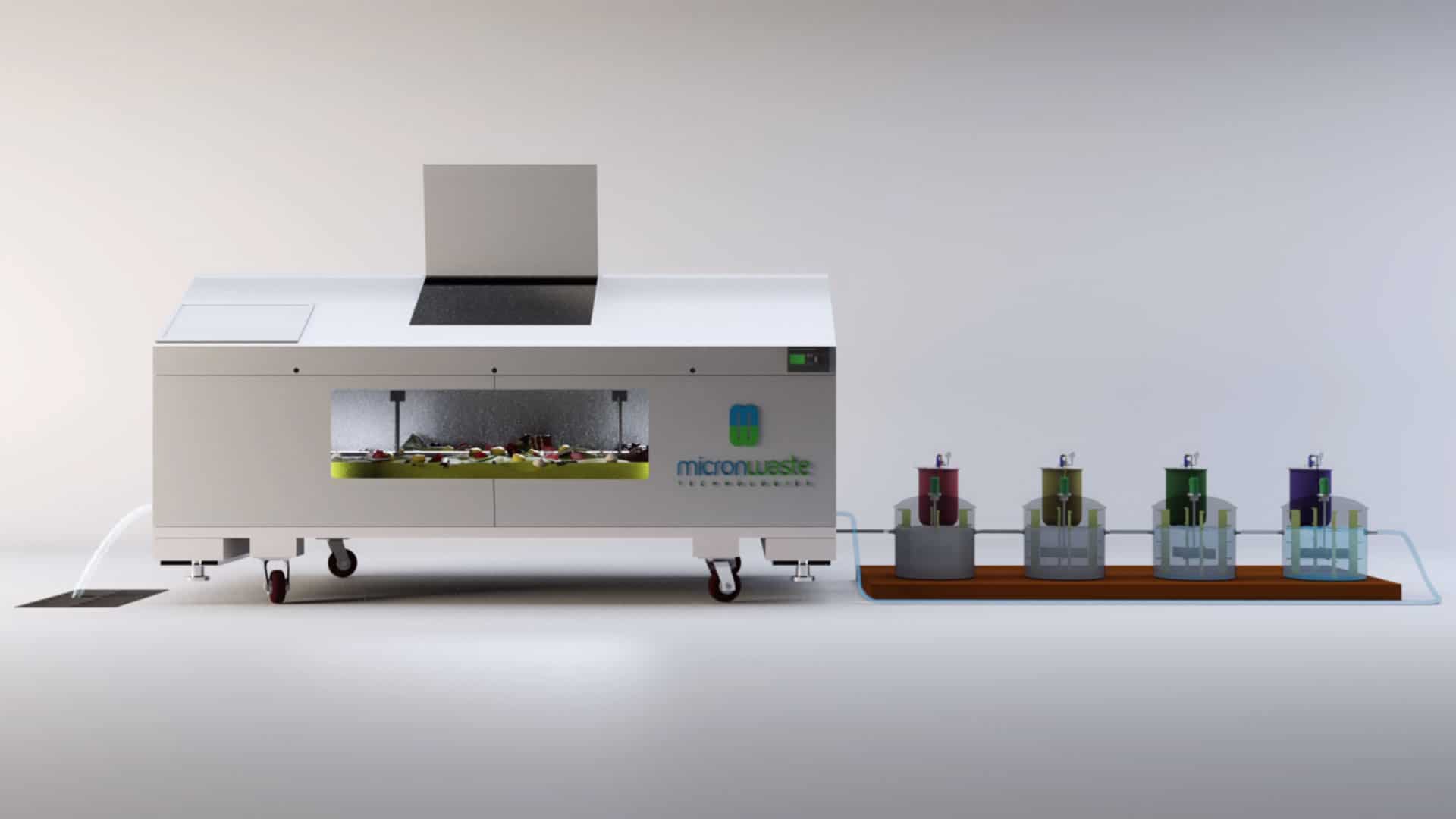 The new Organivore™ 2.0, designed for on-site waste processing for commercial producers of food waste, including supermarkets and food processors, producers and distributors, will combine new innovations developed for the CannavoreTM system, which Micron and BCRI purpose-built for the cannabis industry. Micron and BCRI will now rapidly install new technologies and applications into the Organivore™ 2.0, with market readiness anticipated in the second half of this year.

Roughly one-third of the food produced in the world for human consumption every year – approximately 1.3 billion tonnes – is lost or wasted. Food losses and waste amounts to roughly US$680 billion in industrialized countries and US$310 billion in developing countries (FAO). Much of this food is diverted to landfill:

The Organivore™ reduces air and water pollution by:

“The Organivore will target, in particular, the significant segment of the food industry that has challenges with compliant, sustainable and cost-effective management of food waste, including restaurants, hotels, cruise ships, food processers and hospitals,” said Alfred Wong, President & CEO of Micron. “We will initially prioritize the treatment of specialized waste, which has more contaminants. Specialized waste is more highly-regulated and offers high-margin opportunities for Micron. Conventional methods of treatment are under increasing government and regulatory scrutiny, putting pressure on waste producers to find cleaner and more efficient management strategies.”

The Organivore™ will utilize a unique blend of microbes and enzymes specifically designed for organic waste, including waste generated by the beer, wine and spirits industries, which is one of many sectors that has expressed interest in Micron’s patented bio-process for effluent treatment. The Organivore™, which extracts and purifies water from waste, will allow clients to reduce waste management costs incurred by: landfill tipping fees, hauling costs and water permits and/or fines for exceeding municipal effluent discharge standards.

“BC Research is excited to be a part of the team rolling out Micron’s technology to a large and growing market and are very impressed with the executive team’s forward vision,” said James Lockhart, BCRI Vice President and Chief Technology Officer. “Dr. Bob Bhushan has developed very timely innovations that promise to simultaneously reduce facility operating costs and greenhouse gas emissions associated with trucking and methane generation from landfilling.”

In the expanded collaboration agreement, as with the previous cannabis waste technologies collaboration agreement announced in February 2018, Micron retains all intellectual property rights to systems and processes developed. BCRI is based in Richmond, BC, near Micron’s new R&D facility in Delta, the Micron Waste Innovation Centre, which is slated to commence full operations before mid-Q2. The proximity of the companies’ engineering and wastewater teams facilitates synergies and increases efficiencies for rapid development of commercial products and streamlined systems testing.

“Our prototype Organivore™ has already been successfully tested under commercial conditions. The next step is to make the system turnkey for customers,” said Dr. Bhushan. “We have worked closely with BCRI on the Cannavore and know they can hit the ground running and compress our timelines to install next-gen bio-processing, upgraded computer systems, safety systems, customized housing, temperature controls and automation.”

In January 2019, Micron announced it was awarded a United States Patent and Trademark Office (USPTO) patent US10,144,044 on the Company’s proprietary bio-process and compositions for the treatment of waste effluent. The patent recognizes and safeguards the innovative process developed by Dr. Bhushan, whose research led to the development of “immobilization technology” to protect and enhance highly selective and effective microorganisms and enzymes. Dr. Bhushan’s advanced bio-process effectively allows effluent-degrading, GRAS[1]-certified organisms to biodegrade organics inside Micron’s patented industrial-grade Cannavore™ and Organivore™ cannabis and food waste digester units. The immobilization process protects the live agents, which activate with increased potency and enhanced metabolic activity.

In July 2018, the Company announced it was awarded an Industrial Design Certificate of Registration from the Canadian Intellectual Property Office (CIPO), with US patent pending, for its commercial digester units, which employ a patented blend bio-agents and process. The units’ innovative, functional design enhances food digestion efficiency by up to 40% while reducing the machine’s footprint and digestion time. The technology was repurposed for use in the Cannavore, with the addition of proprietary conditioning agents to denature active pharmaceutical ingredients (APIs) in cannabis waste.

About BC Research Inc.

BC Research Inc. (BCRI), as part of the NORAM group of companies, has a global reputation for innovation and excellence in the supply of proprietary engineering and equipment packages to the chemical, pulp and paper, minerals processing and electrochemical sectors. The company’s six specialized business groups, with a staff of over 200 professionals, have completed capital projects on five continents. The NORAM group of companies is recognized worldwide as a leader in the fields of nitration, sulfuric acid and electrochemistry. In addition to carrying out large assignments for major multi-national clients and municipalities, BCRI works with early-stage technology companies to provide engineering design and fabrication support, share experience in technology commercialization and grow with companies as a strategic stakeholder.

About Micron Waste Technologies Inc.
This article is published by
Collaboration with BC Research Inc. Expanded