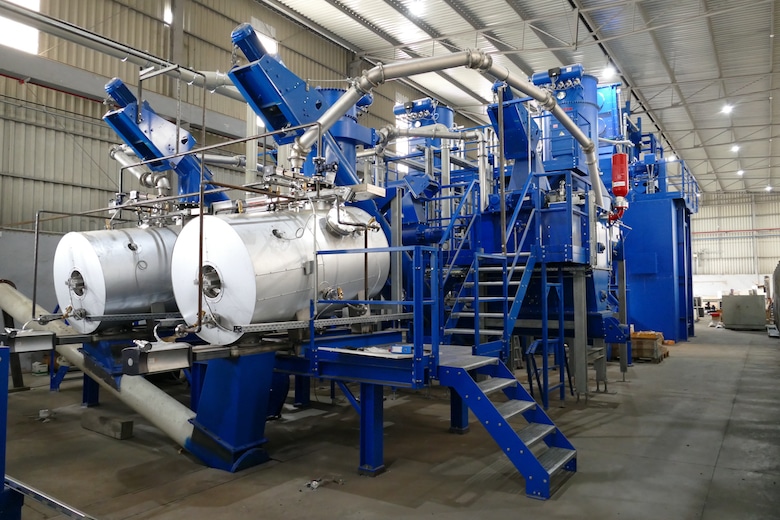 As waste electrical and electronic equipment contains recyclable, valuable metals on the one hand and pollutants on the other, all WEEE treatment plants must comply with the standards EN50625-2-3 and CCL/TS 50625 of the European Committee for Electrotechnical Standardization (CENELEC) from the end of May 2020.

This ensures that valuable substances can be reused and that pollutants can be disposed of properly without posing a threat to the environment. A particular challenge is the recycling process of refrigerating devices, which contain chlorofluoro and hydrocarbon compounds used as foaming agents for insulation. When they are released, they damage the ozone layer, which is why they must be removed and safely collected in a closed treatment plant. In order to further promote recycling, the EU decided in 2002 in its “Directive on Waste Electrical and Electronic Equipment” (WEEE Directive), which was amended in 2014, that from 2019 onwards all EU member states must collect at least 65 percent of the average weight of electrical and electronic equipment placed on the market in the member state concerned in the previous three years.

Erdwich Zerkleinerungs-Systeme GmbH recently erected a recycling plant for refrigerating devices at the Ambigroup Recycling Park in Seixal, 20 km south of Lisbon, which meets the current standards and can process and separate up to 60 appliances per hour.

Germany is lagging behind when it comes to recycling electrical appliances: Despite the prescribed WEEE Directive, Germany has repeatedly fallen short of its target of collecting 45 percent of waste electrical and electronic equipment in recent years. It can also be assumed for the future that Germany will not achieve the now increased quota of 65 percent.

Exemplary countries such as Portugal, Austria or Sweden, which were already within the quota in 2015, have good chances, however. The recycling company Ambigroup, for example, is helping to achieve the recycling quota in Portugal. In April 2019, a recycling plant for refrigerating devices was put into operation there, which easily meets the requirements prescribed by the EU.

This is made possible by a special pre-shredder, the RM1350/2-2500 twin- shaft ripper from Erdwich Zerkleinerungs-Systeme GmbH, which optimally disassembles the components of the refrigerating devices for further processing. “The real challenge in developing this new type of machine was to build a shredder that could handle even massive foreign matter without breaking the machine. This has never been achieved before,” explains Harald Erdwich, Managing Director of the company. As a specialized engineering and production company, Erdwich has been developing individually adapted plants for 40 years, including the recycling of refrigerating devices.

The modern recycling plant at Ambigroup Reciclagem S.A. was planned, designed and finally put into operation for months hand in hand with the Portuguese company. This procedure was important because the company also integrates its own machine components such as a pre-dismantling section, a non- ferrous metals separation plant and a PU discharge after the process. The processing of the refrigerating devices in the recycling plant is already taking place in accordance with the European standards CENELEC EN 50625-2-3 and CLL/TS 50625 of 3/4 July 2017, which will come into force in May 2020. In order to conserve resources and the environment, this processing must take place in a closed treatment plant. The end products supplied by the recycling park in Seixal, which went into operation in April 2019 with 26 installed units, are non-ferrous metals, ferrous metals, plastics and PUR foam.

Ambigroup had been involved with many suppliers of recycling technology in advance of this project, ultimately opting for the Erdwich Zerkleinerungs-Systeme GmbH. The decisive factors were not only the price/performance ratio but also the compact design with a size of cutting gear of 2.5 m in length and 1.35 m in width, the concept of the plant and its ease of maintenance. The special feature of the twin-shaft ripper, which is mounted on the plant in Portugal as a coarse crusher and optimally disassembles the components of the refrigerating devices for further processing and subsequent breaking- up of materials, is the uncomplicated procedure for maintenance and repair works: For example, in the event of signs of wear, the comminution tools incorporated in it do not have to be laboriously removed first. As they are easily accessible, they can simply be repaired by welding in mounted position inside the machine and replaced or reconditioned.

The knives of the cutting gear made of wear-resistant special steel are individually inserted and can be individually replaced so that different arrangements are possible depending on the material to be shredded. In addition, the twin-shaft rotor ripper principle enables both forward and reverse ripping. Each external shaft is individually driven by a special flexibly mounted gear. The PLC control also ensures automatic reverse and cut-out control. The twin-shaft rotor ripper system runs particularly slowly and thus guarantees gentle processing.

In addition to these factors, the good quality of the output fractions was also decisive for Ambigroup: The end products polystyrene (PS) and ferrous and non-ferrous metals can be easily separated to meet the requirements of the European standard. The EN 50574:2012 with extensions 50574:2014 and 50574:2015 was issued by the European Committee for Electrotechnical Standardization CENELEC.

It regulates the disposal of waste refrigerating devices and has been incorporated in Germany since 2015 as a corrected DIN standard. All Erdwich devices are designed to comply with the regulations. The Erdwich plants were predestined for this because the plant operator demanded that reprocessing must always be carried out according to the latest state of the art, i.e. within an absolutely tight plant from which no harmful substances can escape. Erdwich can easily expand the plant in Seixal or retrofit a briquetting system for the PU foam that has so far been discharged loosely.

Crushers, shredders and bespoke recycling plant – that’s the world of ERDWICH. We are a highly-specialized engineering and manufacturing company working in recycling and shredder technology. Our core competencies are shredding ...