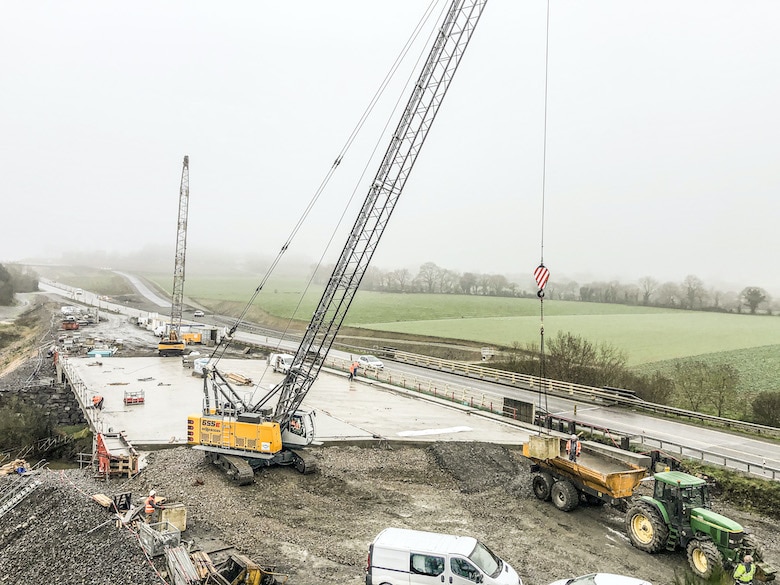 STRAUBING - He didn't have much time to settle in: Delivered in November 2019 by SENNEBOGEN sales and service partner SYGMAT, the 55t duty cycle crane is already proving itself in its first job: For LEPINE TP, it lifts heavy loads to help build the new motorway bridge to the "Gate of Brittany".

First Mission Leads to the “Gateway to Brittany”

LEPINE TP is a longstanding SENNEBOGEN customer and has had a 640HD duty cycle crane (load capacity 40 t) and a 650HD (load capacity 50 t) in its fleet for several years. Integrated into the ANGEVIN Group since 2010, the company received its brand new SENNEBOGEN 655HD at the end of 2019. The first major construction site for this new 55 t duty cycle crane is in Brittany: The SENNEBOGEN 655HD joined its “little brother”, the SENNEBOGEN 640HD duty cycle crane, on the last few kilometres of the Bretagne-Anjou route. Work is currently in progress on the completion of the last section, which will pass the municipality of Martigné-Ferchaud and be extended to two two-lane roads. This section, almost 3 km long, will be the last of the line in Ille-et-Vilaine, a 48 km section of which the département has already completed almost 45 km in recent years.

Ille-et-Vilaine is also called the “Gateway to Brittany”. Those approaching Brittany from the east, for example via the northern motorway route A84 or via Paris (A11 or A81), cannot get past Ille-et-Vilaine. The central traffic junction in Ille-et-Vilaine is Rennes. The two major motorways lead to the Breton capital, a ring road surrounds the centre and distributes car travellers to the other routes in the region. When this work is completed in 2021, the neighbouring Maine-et-Loire will be accessible by a connecting expressway from the capital Rennes.

The construction project on which the two SENNEBOGEN duty cycle cranes of the ANGEVIN Group are currently working is a 45 m long steel composite bridge with a concrete cover plate. It is one of the most important sections of this final motorway segment, which will be put into operation in spring next year. The SENNEBOGEN 655HD, thanks to its load capacity of up to 55 tonnes, enables the heaviest loading and lifting operations to be carried out for support on the construction site. Thanks to sensitive control, it can place the loads precisely on the trucks provided for this purpose.

Equipped with two powerful 160 kN freefall winches and a generously dimensioned 283 kW (385 PS) engine, the SENNEBOGEN 655HD can of course perform heavy lifting operations, but it also proves itself especially in demanding operations with numerous applications. Whether it is a diaphragm wall grab, piping machine, dragline bucket or leader – no job is too tough for this all-rounder. It goes without saying that it meets the requirements of emission stage V. But it is not only the inner values that are convincing: The new door concept, with which the side covers can be folded up like on the SENNEBOGEN 100 t duty cycle crane 6100 E, allows even better and safer access to the inside of the machine. Exclusive to SENNEBOGEN duty cycle cranes: the optional elevating cab for the best overview.

SENNEBOGEN was founded in 1952 to develop and produce machines for the agricultural industry. The company has now established itself as a full service provider and quality leader in crane technology and material handling. As an international company, SENNEBOGEN develops and produces complete model ranges ...