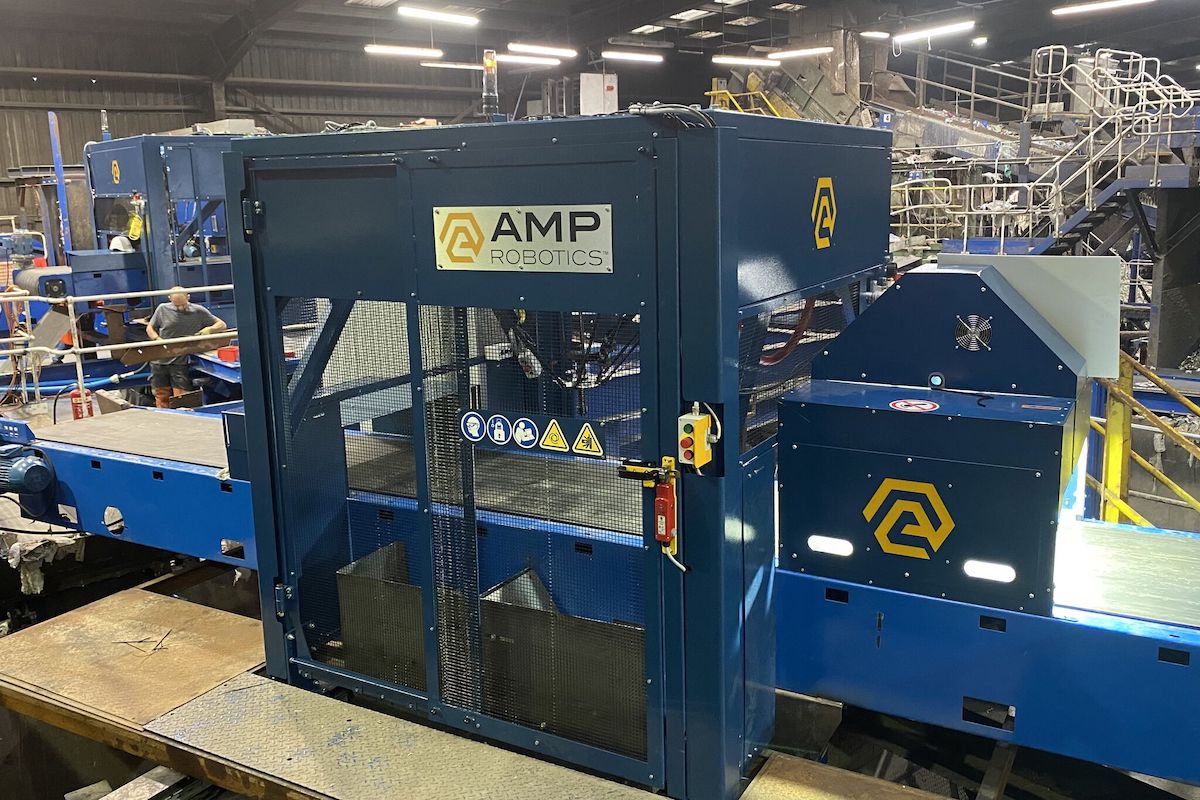 Recyco, a leading waste and recycling company in Northern Ireland, processes around 150,000 tonnes of material a year with the capacity and scale to provide unique solutions to business and local authorities. The company has taken decisive action to combat labour shortages by installing AI-guided robots into its recycling facility. Recyco is the first deal that has been closed with REP-TEC Advanced Technologies, AMP’s official reseller and integrator for customers in the UK and Ireland.

Recyco Waste operates a dry mixed recycling facility. The company takes in co-mingled recyclable material, which consists generally of cardboard, paper, plastics, aluminum, steel, and glass and separate that into individual components, bale it up, package it up and send it onto further reprocessing.

“Where the dual robot is now, I previously had four people there, running out over two shifts, so that’s removing eight people per day. Where the single robot is, I’m replacing two staff per day on that. It’s doing every bit as good a job as a human labourer was doing previously.”

Cunningham says that unfortunately, due to a mix of Brexit and COVID, they have been experiencing serious labour shortages. The robots have allowed them to take back control of their plant.

“The benefits I’m seeing from using robots and AI, as opposed to using human labour is that productivity remains consistent right across the shift. There are no breaks, no holidays, no sick days. We have had to move with the times, and we’re proud to be leading the way for AI-powered recycling in these islands.”

The solution provided was the AMP Cortex™ robotic cells. A high-speed, intelligent robotics system. Two of these were installed:

This is two robots splitting the conveyor belt over a fibre line in a quality control role after a screen. The conveyor belt is 1.4m wide and each robot takes one half of the belt and can pick three separate materials each. The robots are programmed to remove residue, OCC, and containers through a negative pick, leaving a high quality fibre. Each robot is able to pick up to 60 picks per minute when there are sufficient target materials

This is one robot picking to both sides of the conveyor belt over another fibre line in a quality control role following an optical sorter. The conveyor belt is 0.8m wide with the robot able to pick 4 separate materials from the belt (two to each side of the belt through custom chutes. The robot is programmed to remove residue, ALU cans and plastic containers through a negative pick, leaving a high quality fibre product. This robotic cell is able to remove up to 80 picks per minute when there are sufficient target materials available.

“AMP’s robots have quickly doubled the pick rates we were accustomed to, maintaining and even improving the purity of our bales, which we depend on to maximize prices with our end-market buyers” said Michael Cunningham, Recyco Owner and CEO.