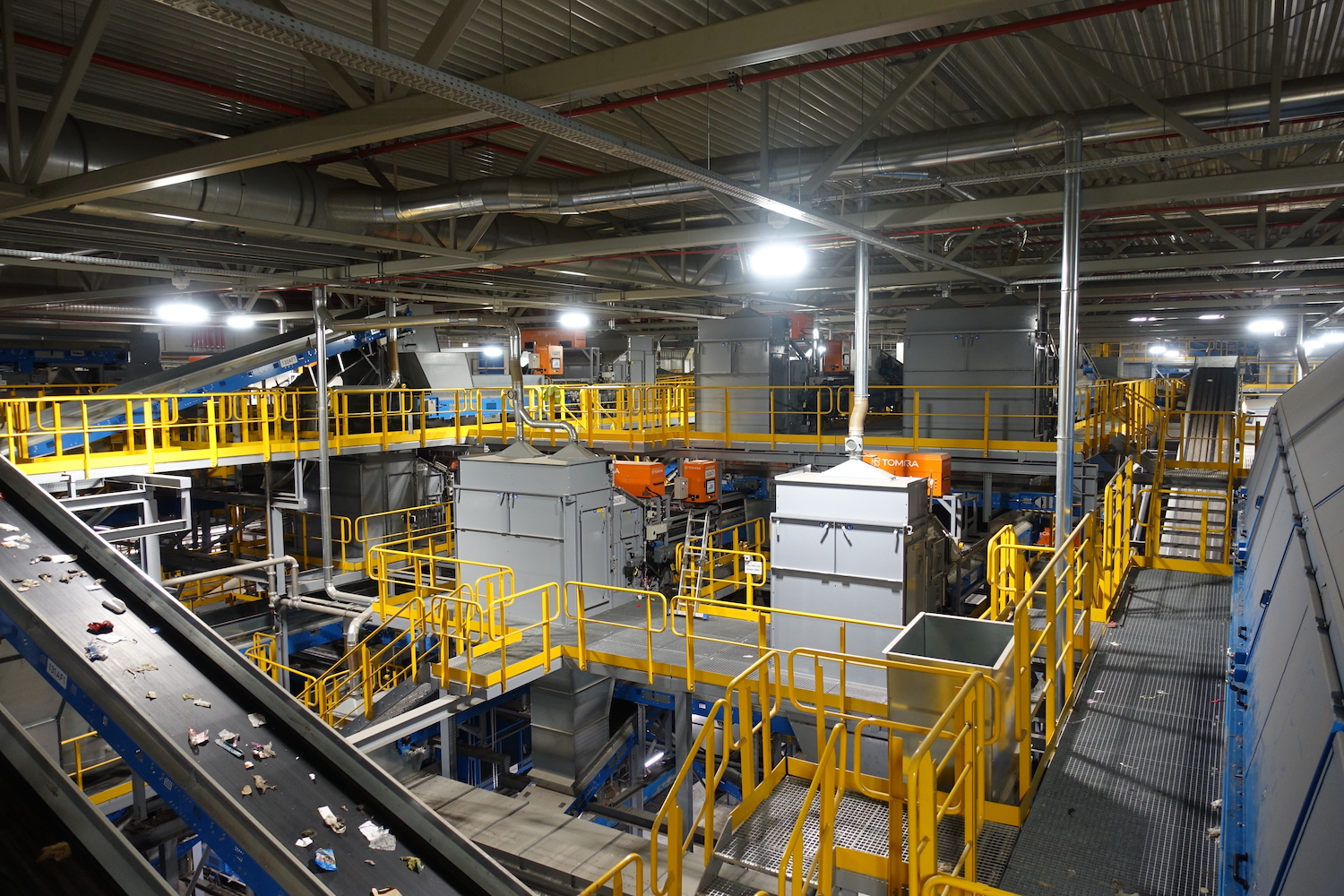 TOMRA and a Norwegian waste sorting plant have demonstrated that mixed waste sorting prior to disposal is a superior solution to separate collection. Since it stopped the separate collection for plastics in its region and unleashed the power of mixed waste sorting, the facility increased recovery rates from 28% to 82% and achieved recycling rates of 56,4%, thus meeting the EU’s 2025 recycling targets ahead of time. Today, IVAR ranks first in processing MSW by volume.

Situated in Forus, between the cities of Stavanger and Sandnes in the southwest of Norway, IVAR manages all residues and waste collection from 10 municipalities with an approximate population of 325.000. With its advanced municipal solid waste sorting plant, it recovers high volumes of recyclable materials before incineration, reducing CO2 emissions and the global dependency on virgin material by supplying high-quality recycled content for new products and packaging.

When local and international recycling targets became increasingly stringent, IVAR recognized the need to improve its waste management methods and decided to more closely examine the hidden potential of its region’s household waste. With the goal of finding the most effective and environmentally friendly approach to waste management, the company sought the advice of TOMRA. To identify the opportunities in mixed waste sorting and assess its performance potential, the plant sent MSW samples from the region to TOMRA’s test facility in Germany. There, these materials underwent extensive tests on the company’s sorting machines. Test analysis showed that, whereas paper recovery from MSW streams performed reasonably well, plastics recovery offered room for improvement. Test analysis unveiled that the household waste contained high amounts of plastic recyclables, even though they were meant to be disposed of separately. The team considered the analysis as a clear call for concrete, future-oriented action.

Based on the analysis and the still untouched possibilities in MSW sorting, a new business case was developed. The result: the construction of a new fully automated mixed waste sorting plant consisting of new facilities for plastics reprocessing and paper sorting, as well as the elimination of the separate plastics collection in that region. Previously collected separately, plastics are now also disposed of in the grey bin and recovered in the new facility. As a consequence, only the plant’s residues are transported to the waste to energy plant and used for the production of electricity and energy for remote heating systems. In short, the materials discarded by the municipality are turned into value again in the most optimal way.

“We have been delighted to be given the opportunity to consult with IVAR in the planning of the new plant, provide our latest sensor-based sorting equipment and accompany such an exciting and game-changing project,”, comments Oliver Lambertz, TOMRA Recycling’s Vice President and Head of Business Development. By combining the most advanced processes, plant equipment and sorting technologies, the waste sorting plant has set the following targets: sort nearly all PE, PP, PS or PET plastics suited for (mechanical) recycling; sort 95% of the fractions identified; and realize purity rates of 95-98%.

The residual waste generated by the municipalities IVAR serves contains a large amount of valuable and recyclable materials, which in their purest and homogenous form, can be further processed, recycled, and reintroduced into the market as high-quality recyclates. Today, IVAR processes 40 tons of MSW per hour from which paper, plastics, metals, and residues are separated in numerous steps:

Once the collected material is fed into the plant, items > 350mm are sorted by a finger screen and shredded into smaller pieces before two drum screens separate the material into three target sizes: 0-60mm; 60-150mm; and 150-320mm. In a second step, TOMRA’s AUTOSORT machines recover 90% of the mid-sized (60-150 mm) and the large (150-320 mm) plastic fractions before they extract mixed paper. Finally, magnets and eddy currents remove both the non-ferrous and ferrous metals.

After plastics have been presorted, they are further sorted by material type. First, ballistic separators separate plastic film and rigid plastics. Afterward, 14 AUTOSORT® machines undertake the separation of rigid plastics into PP, HDPE, PS, PET and create a clean fraction of LDPE plastic film. To further increase purity levels, these clean material fractions undergo a second sorting step, also carried out by AUTOSORT® machines, to remove the remaining contaminants. The high-quality PS and PET end fractions are then packed into material-type-specific bales and sent to different mechanical recycling plants in Europe. LDPE, HDPE and PP are washed, dried and pelletized in the Forus plant and sold as pellets.

At the same time, the mixed paper fraction, as well as mixed paper and cardboard infeed coming from separate collection, is processed in a separate sorting line. From the 23,250 metric tons of paper sorted per shift, 95,7% of the infeed material is turned into four salable paper products such De-ink, ECC (corrugated cardboard), tetra Pak and carton.

Leading the way with TOMRA technology

When TOMRA was selected as technology provider of IVAR’s waste sorting plant, it was clear that the most advanced sensor-based sorting technology was required. Specifically, TOMRA provided 22 of its state-of-the-art AUTOSORT® machines to extract both paper and plastics from household waste. Outstanding technologies and leading-edge features make AUTOSORT® unique.

Equipped with sophisticated infrared sorting technology, which combines near infrared (NIR) and visual spectrometer (VIS), the machine can accurately and quickly identify and separate different materials according to their material type and color. In Forus, AUTOSORT® machines sort paper into three and plastics into six target fractions. Its sorting accuracy is mainly based on the integrated, patented FLYING BEAM® technology, which evenly distributes light across the entire conveyer belt and scans and analyzes all material passing through the scanner. The sensor sends the respective signal to the machine’s valve blocks which turn the scanner’s information into action, either ejecting or dropping scanned items.

Rudolf Meissner, Chief Supervisor, Waste Sorting Systems at IVAR, stated: “TOMRA’s sorters and consultancy convinced us right from the beginning. As we have experienced firsthand, they are an essential tool for automated waste sorting, running high throughput and generating high yield and purity levels alike – the goal all sorting plants are pursuing and the reason why these machines definitely belong in any modern sorting and recycling facility. Combined with their reliable service, we could turn our waste sorting process into a cost effective and competitive activity.”

When starting operations in 2019, IVAR set an overall goal to recover nearly all plastic types (PE, PP, PS, PET) and a more concrete target to realize purity rates of 95-96% in LDPE, PP, HDPE, PS and PET sorting. Thanks to the ultraprecise sorting machines, the plant’s goal soon became reality, with purity rates of up to 98% achieved. As for paper, sorting studies have shown that more than 85% of all beverage cartons in the residual household waste have been successfully separated from the household waste stream.

A new life for plastics

After extraction of recyclables from the infeed material, the sorted fractions undergo an extensive recycling process on-site. Whereas homogenous PET and PS bales as well as both ferrous and non-ferrous metals are sold to European recyclers, Polyolefins (LDPE, HDPE, and PP) are shredded into flakes, hot washed, dried and pelletized on-site before these are sold as industrial commodities. Thousands of tons of PE and PP recovered from MSW have been diverted from incineration and to be integrated in the production of high-quality PO recyclates.

The business case at IVAR proves that sorting prior to disposal can preserve recyclable materials previously incinerated and strongly contribute to climate protection. Prior to opening the waste sorting plant, the separate collection rate in the region served by IVAR was high: 65% of the waste collected in the municipalities was sorted. However, with the plant fully operational, the recovery rates of recyclables are now as high as 74%.

From an environmental perspective, sorting, recovering, and recycling plastics from mixed waste streams – instead of relying solely on material-dedicated collection systems – leads to a two-fold reduction in CO2 emissions. First, less plastics, that comes with a high caloric value but based on fossil carbon, are incinerated. Second, the provision of high-quality recycled plastics reduces the need for primary production. Thus, IVAR contributes to delivering environment-friendly feed and works in line with the principles of a circular economy, resulting in a decrease of 33,000 metric tons of CO2 emissions a year, which is equivalent to taking 20,000 fossil fuel cars off the road.

Looking back and beyond

The results have clearly shown that MSW sorting before incineration brings numerous benefits: in Norway, the need for separate collection of plastics packaging, and its associated costs, has been eliminated and enabled IVAR to provide ready-for-market recycled material for new products and packaging, while reducing its CO2 footprint considerably. Furthermore, the partners have already started to investigate if glass and biowaste could be profitably extracted from the fines fraction (0-60 mm).

Automating the sorting process with the latest technology has strongly contributed to this change. However, the partners are convinced that automation only complements waste sorting but will never replace local separate waste collection systems. Rather, the components of optimal waste management must go hand in hand – from collection to mixed waste sorting to recycling – to have the biggest impact on how much we recycle. In Norway, we see that it works.

TOMRA Calls For Closing The Loop on Plastics and Beyond