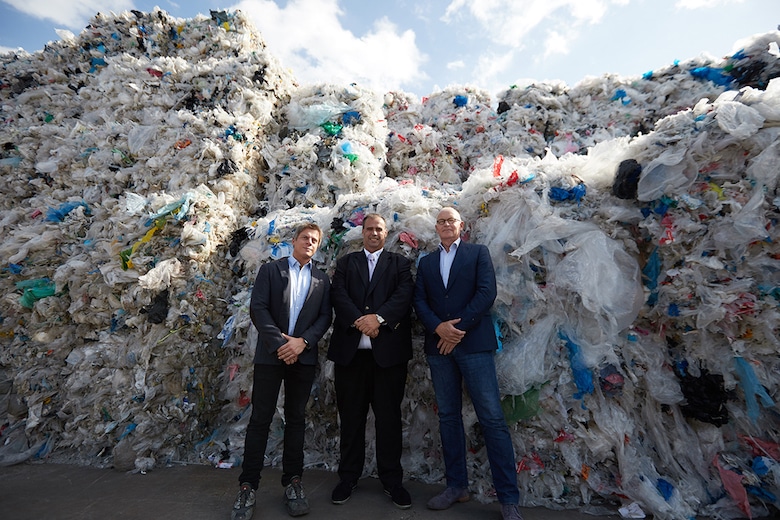 Daly Plastics is one of the largest plastics waste processing companies in the Netherlands. At the Zutphen site, the subsidiary Caroda Polymer Recovery recycles agricultural and packaging films. The aim is to produce regranulates of the same quality as virgin material. That requires innovative solutions. Two Jupiter 2200 and four Micromat 2000 shredders from Lindner Recyclingtech provide the recovery facility with the ideal particle size.

Peter Daalder is a seasoned industry expert and can often be found at specialist events such as the “Internationaler Altkunststofftag”, an international conference on plastics recycling. The Dutch businessman’s expertise is particularly in demand when it comes to film recovery. Peter Daalder recognized its potential more than 30 years ago, at the age of just 16, and founded Daly Plastics BV in Zutphen with the help of his parents in 1985. At the time two generations of his family had worked in the waste paper trade. His parents belonged to the second generation of his family to work in the wastepaper trade. The newly founded company – which he still presides over today – specialized in plastic waste collection and processing.

25 years later, Peter Daalder expanded his business, entering the plastics recycling business in 2013 with his own recovery facility for agricultural and packaging films. Market conditions had changed, and the collection logistics and used material export company grasped the opportunity. The subsidiary Caroda Polymer Recovery now operates four granulation lines at the Zutphen site. This makes Daly Plastics one of the largest plastics waste processing companies in the Netherlands today. The agricultural film is collected from over 2,500 farmers in the Benelux countries and northern Germany. Approximately 64,000 metric tons of used film arrive for processing each year, the majority of which is recycled as reusable polyethylene recyclate (regranulate).

Daly Plastics relies on Lindner’s technological expertise for film shredding. Two Jupiter 2200 and four Micromat 2000 shredders are in continuous operation – four shifts, 24/7, 365 days a year. The material delivered to the site is weighed, roughly pre-sorted by crane grabbers and fed onto a conveyor belt for processing. A Jupiter located just outside the sorting hall shreds the agricultural film so that the drum screen can do a better job of filtering stones and soil out of the material. ‘Agricultural film often contains foreign material such as lumps of soil or stones. Even large foreign matter in the feed material doesn’t make any difference to Jupiter,’ says Peter Daalder, adding: ‘That’s one of the main reasons why we decided to buy Lindner shredders.’

The second Jupiter 2200 primary shredder is installed in the hall, in front of one of Pellenc’s most advanced automatic NIR sorting systems, and shreds post-consumer film to A4 size. Optimum output and simultaneous dosing for subsequent sorting are essential for a smooth operation. In addition to these features, the Jupiter also pushes all the right buttons with its low energy consumption (energy-efficient drive, flywheel energy storage), resistance to foreign parts, as well as easy operation and maintenance.

In the hall, the packaging film is first roughly separated by the crane grabber and then fed into the Jupiter, which shreds the material to the size of A4 paper, as mentioned above. ‘This size is ideal for optical sorting processes,’ explains Peter Daalder. ‘It means the sensors can optimally distinguish LDPE from other PE and PP plastic types and separate it from the material stream. The Jupiter produces the perfect output, with the perfect cut for subsequent automatic NIR sorting.’

Lindner’s shredders were also chosen for their formidable safety clutch that prevents machine damage caused by foreign parts and non-shreddables as well as its convenient hydraulic maintenance door, which has also proven itself. Peter Daalder is convinced that the Jupiter is the best choice for his application: ‘It can happen that metal parts or even stones get into the Jupiter despite pre-sorting. The safety clutch prevents the cutting system from being damaged in the process. The machine immediately jams and all our employees have to do is open the hydraulic maintenance door. That’s very easy and not at all messy since the material that’s still present in the cutting chamber is pushed upward. Then you simply let the cutting system run back a little, remove the foreign material and close the maintenance door. All in all, that only takes a few minutes.’

The recycling of the film flakes next door comprises fine shredding, dry cleaning, extrusion, and granulate bagging. Each of the four lines processes one color of film and is equipped with a Lindner Micromat 2000. An economical solution for Daly Plastics/Caroda: with a capacity of two to three metric tons per hour, the Micromat produces 50-millimeter particles. This is ideal for subsequent dry cleaning, whereby Linder WashTech’s Intensive Dry Cleaner 150/300 is used to remove leftover dirt and mineral build-up, as well as reduce the moisture present in the film.

Subsequently, the clean film flakes are granulated and transported to the extruder. The extruded, thread-like plastic strands are then cooled and cut to pellets. The end product is filled into big bags ready for dispatch or stored in silos for transport to the customer by tanker. The very homogeneous grey, black and brown granulate pellets are used to produce a new tear-resistant film and, for example, waste collection bags.

The Micromat has proven itself a key component and benchmark for the target quality: the extrusion line is fed with the optimum particles. As Peter Daalder confirms and emphasizes: ‘The machine fulfills two important functions in the line. It reduces the feed material to exactly the optimum particle size needed for the extruder and simultaneously doses the material. The Micromat is, therefore, a shredder and a dosing system in one. Another great advantage is the internal pusher to make feeding even more efficient. That’s also an added benefit for dry cleaning downstream. Thanks to the continuous, uniform output, the material can be cleaned effectively. The degree of purity determines the quality of the end product. The industry needs clean and homogeneous granulates to turn it back into film.’ Daly Plastics continuously checks the quality of the granulates in the laboratory and also produces rubbish bags for inspection.

Lindner has exceeded Daly Plastics/Caroda Polymer Recovery’s expectations. Experience has shown that the same can be said of the machine and system manufacturer’s after-sales service. As yet, maintenance work has only been carried out as part of the usual routine – something that clients can do themselves. Long downtimes are virtually non-existent. Peter Daalder is very satisfied with the overall system and would choose Lindner’s innovative machines again in the future.