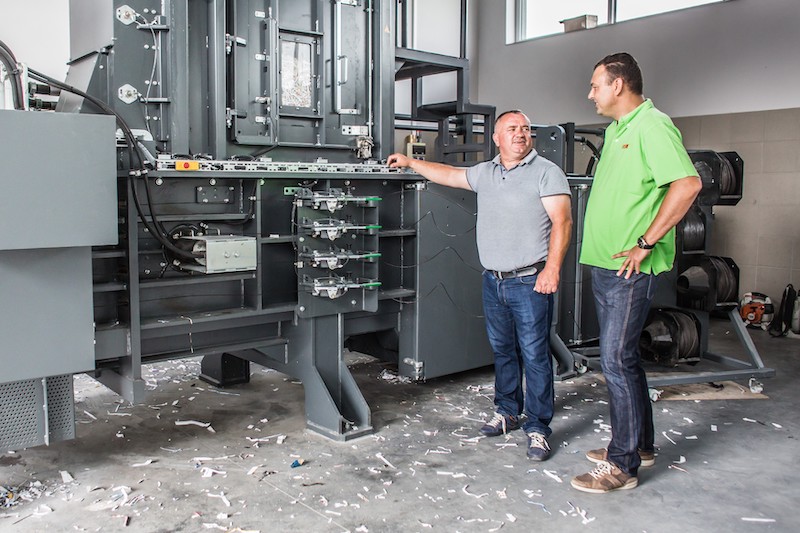 The family company P.U.H. Kondzłomex Szymon Woźny has been collecting and recycling secondary raw materials such as waste paper and foil for over 20 years. Right from the start they used HSM baling presses.

The fully automatic channel baling press installed in 2013 was no longer able to cope with the increasing throughput and a bigger solution was needed. After intensive research they once again struck lucky with HSM and the HSM VK 6015 has now been in service for some time, and with good results, in Jaraczewo in the municipality of Szydłowo, a village in the north-west of Poland.

The owner-run company currently has five employees, all of whom are in no doubt about the quality of the German machines. P.U.H. Kondzłomex first came into contact with the baling press manufacturer HSM when it began operating in 1995 and it purchased a second-hand HSM vertical baling press in very good condition. In the years that followed the company continued to grow and it was necessary to supplement the manual, vertical baling press with a machine with higher throughput. P.U.H. Kondzłomex therefore turned to HSM Polska, the Polish subsidiary of HSM GmbH + Co. KG and consequently a second-hand fully automatic channel baling press was put into operation in 2009. This was in service continuously for over four years, before being replaced by a new baling press, the HSM VK 4212, in 2013.

The machine ran smoothly for years and would theoretically still be in service today, but its throughput capacity was simply no longer enough to cope with the increasing amount of material for compression. This meant that the material delivered was all too often not properly pre-sorted, and P.U.H. Kondzłomex’s customers set great store by homogenous bales. And not only that; material that is stored for too long costs money and so loses value. What was needed was a baling press with higher throughput capacity that would work more quickly than the previous model. To ensure this, the plan was to equip future machines with conveyors that can be directly fitted with a front loader. This solution reduces the time spent feeding material and the material for compression can then be processed in real time. The working time saved is used by employees to pre-sort material manually. Owner and CEO Szymon Woźny knows exactly how important pre-sorting is, because “if the bales are not properly sorted, no-one will buy them from you”.

An additional challenge for the company was that the baling press currently in service was due a general overhaul due to wear and tear and so would be out of service for some time.

It didn’t take long to find the optimum manufacturer

To give other baling press manufacturers a chance there was a fair selection process, in which several offers from different providers were invited. The requirements for the manufacturers were clearly stated – to exchange the old machine as seamlessly as possible, if possible, without interrupting the operating procedure. HSM put forward the decisive argument in this respect. As well as buying back the old machine, HSM would handle the entire exchange process: they would dismantle the old machine and install the new baling press. A further advantage of HSM’s solution was the horizontal bale strapping, which is much more suitable for shredded paper than the vertical strapping used by most manufacturers.

Obviously, the longstanding partnership with HSM also played a part in the final choice of the supplier. After all, people have been putting their trust in HSM’s reliable and high-quality products for years. And Szymon Woźny, owner of P.U.H. Kondzłomex, had a high regard for the professional, business-like but also fair way in which the HSM employees collaborated with his company. An individual solution was found

After an in-depth analysis of the desired throughputs – and taking into account all parameters – the fully automatic channel baling press HSM VK 6015, with its pressing power of 720 kN and a throughput capacity of up to 9 tons per hour proved to be the perfect solution for P.U.H. Kondzłomex. This machine is the most powerful baling press and its dimensions mean that it fits into the existing production hall – only the bale chute had to “stay outside”, eventually ending up in front of the hall. Another distinguishing feature of the HSM VK 6015 is its extremely high degree of compression. This was very important to the company, as it means that the main material for compression – shredded paper – can be pressed into more compressed bales of up to 470 kilograms.

The production waste from the printing plant, as well as small quantities of cardboard and foil, is now processed on the baling press in a single-shift operation, five days a week. The company only processes secondary raw materials that can be easily sold. Printing plants and production sites are the biggest suppliers of material for compression. The waste is collected directly on-site from the company in containers and receptacles provided by P.U.H. Kondzłomex. However, it is also possible to deliver small volumes such as newspapers and books directly. All visitors who deliver material are impressed by the large scale of the system. Because of the specific pressing power, the bale density is extremely high. This ensures that the trucks are always full to capacity. Depending on the material a truck can take between 48 and 64 bales. These bales usually take up the permissible maximum load in the trucks – often there is even room for more bales. The so-called logistic minimum – a load of approx. 22 tons – is now always reached. Most of the compressed secondary raw materials are delivered directly to the paper factories without further processing. Post-purchase services

Summing up the project as a whole, CEO Szymon Woźny said: “The collaboration and commitment of the sales staff at HSM and their individual approach to problems is truly outstanding. HSM tries to work with customers to find an individual solution and this has given us renewed and sustained confidence in their overall approach”. This is reflected in the case of the channel baling press HSM VK 6015, whose features included a special loading funnel and a new wire measuring system that regulates bale length. Even external obstacles proved no problem for HSM technicians. Despite the fact that the outdoor temperature was only -14 °C when they were installing and setting up the new machine, it was up and running only one day later.

As well as the new channel baling press HSM VK 6015, the company also uses two vertical baling presses from HSM so that smaller quantities of other materials can be compressed at the same time, if the main baling press is being used for a different material.

Quotation:
HSM tries to work with customers to find an individual solution and this has given us renewed and sustained confidence in their overall approach”, Szymon Woźny, CEO and owner of P.U.H. Kondzłomex

Company
Since 1995 the family-run company P.U.H. Kondzłomex has been purchasing recyclable secondary raw materials consisting mainly of waste paper and foil. The flat hierarchical structure in the company enables it to respond flexibly to customers’ needs, thus cementing a significant position in the market, despite strong local competition.

Task
One channel baling press from HSM – the HSM VK 4212 – has been in continuous service since 2013. But the volume throughput of approx. 7 tons per hour is now no longer sufficient to meet the capacity required. Lack of time meant that the material delivered was all too often not properly pre-sorted, and P.U.H. Kondzłomex’s customers set great store by homogenous bales. And not only that; material that is stored for too long costs money and so loses value.

Solution
After an extensive analysis of the on-site conditions, the fully automatic baling press HSM VK 6015 proved to be the perfect solution. It fits perfectly into the existing production hall and is distinguished by an extremely high degree of compression – perfect for P.U.H. Kondzłomex’s main material for compression – shredded paper.

Click here to find out more about HSM baling presses
This article is published by
HSM GmbH + Co. KG