If there is one part of the recycling process that is not only complicated but also hard, it is the part of separating and sorting the recyclables. Effective recycling relies on effective and efficient sorting. Separating the different elements found in waste streams is crucial for enabling the recovery of useful materials, minimizing the amount of material sent to landfills, and allowing recyclable materials to find a new purpose. There is a wide range of sorting and separating technologies on the market today. This Technology Zone offers an insight into the latest innovations in separation and sorting technology.

Waste separation is the process of separating the waste into different elements. Waste sorting can be done manually at the household and collected, or automatically separated in materials recovery facilities. Hand sorting was the first method used in the history of waste sorting.

Separating waste is the innovation of traditional waste collection and disposal. With the growing waste production and deterioration of the environment, it becomes the common focus on how to achieve garbage utilization and improve the quality of the living environment.

Waste separation is an essential step before the disposal of waste. Through separation, the useful waste can be sorted for recycling and reusing, such as plastics, paper, rubber, bottles, glass, etc. Separation of waste for recycling not only improves the level of resources utilization but also reduces the amount of garbage.

How is a magnetic separator used in recycling applications?

In the recycling industry, magnets are commonly used to attract ferrous materials, such as tin, iron, steel and many more. Magnets are found along assembly lines where they will be placed either above or below the conveyor belts to attract said materials or minerals.

Screening is the most standard form of separating solid waste, depending on their size by the use of one or more screening surfaces. Screening has a number of applications in solid waste resources. Screens can be used before or after shredding and after air separation of waste in various applications. Rotary drum screens and various forms of vibrating screens are the most commonly used screens nowadays.

Screening systems come in many shapes and sizes and provide a variety of sorting solutions. Some of the popular screening systems include the screen drum, trommel screens, mobile screens, vibrating screens, and many more.

The following variables affect the decision of selecting the most appropriate screen:

Sensor-based sorting has become more established in recent years, and it’s commonly used in the mining industry. The benefits of automatic sorting using colour, x-ray or near-infrared sensors are increasingly more common in the industry and therefore accepted as the standard process. Mining technologies, like sensor-based sorting, have the potential to address the problems the industry now faces, such as water shortages, declining ore grades, and increasing environmental regulations.

Sensor-based sorting is used for particle sizes ranging between 0.5 to 300 mm and is completed prior to the application of fine comminution and chemical processing techniques. The goals are to remove waste before it enters production and recover the usable ore.

Robotic recycling sorting uses artificial intelligence (AI) and robotics to sort plastics so humans don’t have to. With advanced cameras and technology, these companies are counting on robots to sort recycling.

How does robotic sorting work?

Cameras and high-tech computer systems that are trained to recognize specific objects will the robotic components over conveyor belts to reach their target. Sensors that are attached to the arms are able to detect and interact with objects such as cans, glass, plastic containers, and any other recyclable items out of the otherwise garbage and place them in their respective bins.

Advantages of robotic recycling include:

The signal recorded by the X-ray sorting method is the content of the selected material, so the sorting process is not affected by other properties of the material.

X-ray methods can be divided into three categories:

An induction sorting system (ISS for short) is the perfect addition to magnetic sorting and eddy-current separation for recovering residual metals from a mix of materials and minerals. These systems are especially suitable for stainless steel and composite materials such as cables or circuit boards.

How does an induction sorting system work?

Pre-sorted bulk material is fed on a conveyor belt. Below the conveyor metal detectors are arranged over the whole width of the belt. The metal detectors are coils with a defined inductance. This inductance is changed if a metal passes by. If metal is recognized it will be blown out with compressed air. The purity of the sorted materials is up to 90%.

Colour sorters (often called optical sorters, digital sorters, or electronic colour sorters) are sorting machines that are used on the production lines in bulk food processing and many other industries. They separate items by their colours, detecting the colours of things that pass before them.

Colour sorting in the recycling industry

NIR sorting is the industry’s preferred plastics sorting technology because it can accurately identify the many different polymers already in use today. NIR technology is also widely used in the waste industry to recover materials of value from streams.

NIR sensors have already been proved to be efficient in the mechanical sorting of plastics in sorting facilities, but also in the mineral industry. They are also an affordable option, as the development of MEMS technology has resulted in very cost-effective NIR solutions.

Laser-Induced Breakdown Spectroscopy (LIBS), is a laser-based analytical, identification and detection technique that has been proposed for numerous applications, as for instance for the detection of metals (i.e., minerals, metallurgical, environmental, etc).

LIBS uses a high-focus laser that erodes the surface of the metal. When this happens, the atoms decay and emit light wavelengths. These wavelengths are specific for each element, thus, the type of metal can be determined. LIBS is a minimally destructive method since it does melt a portion of the surface in order to obtain a result.

Some advantages of the LIBS technology

Trucks are driving on and off the northernmost site of Greek recycling company Konstantinidis Bros SA. Instead of carrying waste, they are hauling in the…

In recent years, automation has played a leading role within waste handling and processing to increase efficiencies, reduce the dependence on labour, and create…

STADLER, a company based in Germany with a worldwide reputation for the turnkey supply of waste sorting plants, has designed, supplied and commissioned the…

Sandro Allegri (SGM MAGNETICS SPA) Sandro has been working in the engineering and project management department for over 30 years with experience in the sectors of Hydro mechanical equipments, automotive. He joined the world of metals recycling 17 years ago. Currently responsible ... Ask a question

Eric van Looy (Sense2Sort – Toratecnica) Being a technical engineer, Eric has spent more than 2 decades on the development of sensor based sorting technologies to advance recycling processes. Since 2006 he pursued automated spectroscopy technologies like XRF (at that time also together ... Ask a question

Jan Kjær (Eldan Recycling A/S) Jan is an experienced Product Area Manager with a long history of working within the mechanical and industrial engineering industry. Jan Kjær has also made a long career within International Sales, and Business-to-Business (B2B) since he graduated ... Ask a question

Tom Jansen (TOMRA Recycling) After studying Chemical Engineering at the Technical University of Eindhoven, the Netherlands, Tom started working as Sales Engineer at Innov-X Systems. He initially focused on selling handheld XRF equipment in the Benelux, while gradually extending ... Ask a question

Erik Kuenen (Goudsmit Magnetics Group) My name is Erik Kuenen. I am the international Sales Manager for Goudsmit Magnetic Recycling Systems. With over twenty years of experience in the waste and recycling branch, I am your specialist for magnetic and non-ferrous systems. From ... Ask a question

Patrick Potzinger (REDWAVE) Patrick Potzinger is Head of Sales at REDWAVE’s head office in Austria. Patrick has a technical education and started at REDWAVE in project management in 2005. In 2010, Patrick became sales engineer in glass recycling and has been serving ... Ask a question

The Polymers Center of Excellence is a not-for-profit organization established by the State of North Carolina to increase knowledge, provide technical support,…

AMP Robotics Corp (AMP), a pioneer in AI, robotics, and infrastructure for the waste and recycling industry, has installed its first AI-guided robotics systems… 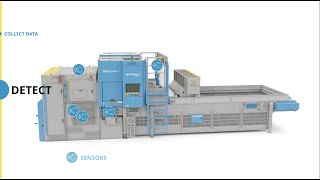 The New Benchmark For Intelligent Sorting