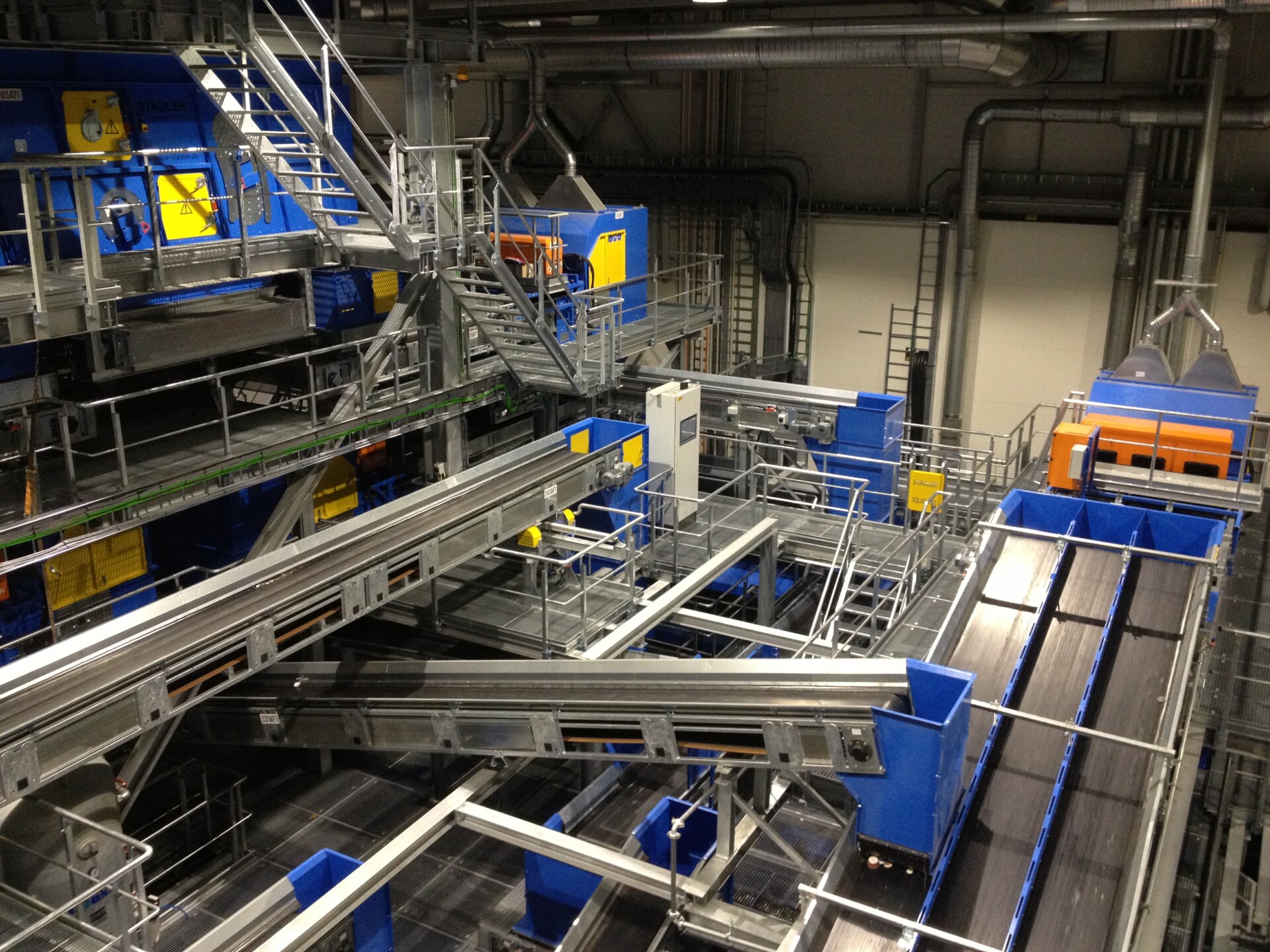 Since it abolished the separate collection of plastics, the facility could boost its recovery rates of organics and plastics while maximizing its recycling efforts and keeping environmental impact low. Not only does the plant come closer to reaching the EU’s 2025 plastics recycling rate of 50%, but also uses the organics recovered for biogas production and the fueling of its waste collection trucks.

The facility is situated in Skedsmokorset, near Oslo, and collects and sorts waste from 7 surrounding municipalities. Until seven years ago, plastics have been collected separately curbside, just as paper and cardboard and residual waste. Unfortunately, a lot of recyclables still ended up in the household waste fraction and were thus deemed to be burnt. To optimize resource recovery and mitigate the negative impact of incineration TOMRA and ROAF jointly examined the household waste composition and came up with a new business model to introduce a new waste management approach for the seven municipalities served.

Based on a detailed analysis and various tests carried out with municipal solid waste examples from the region in TOMRA’s Test Center in Germany and locally in Norway, the partners developed a new business model. The new approach includes a change in the region’s waste management and collection practices and the construction of a new sorting facility. As for the waste collection, the municipalities ROAF serves abolished the separate collection of plastics and now follow a 3-container waste collection system: inhabitants dispose of biowaste in green bags and throw it together with plastics and residues in the municipal solid waste container, which is collected by a ROAF truck and transported to the sorting center. A second container gathers paper and cardboard whereas the third one is used to dispose of glass and metal packaging. The second part of the new business model was the construction of the world´s first fully automated sorting plant for MSW. After a 3-year period of extensive planning, German plant builder STADLER constructed the plant within only 3 months and was awarded the German-Norwegian business award for its efforts in 2014. The trommels, bag openers, ballistic separators, eddy current separators, overhead magnets, and vibratory screens work in unison with the most advanced optical sorters from TOMRA. Sixteen AUTOSORT™’s process 40 tons of waste per hour. From this waste, the units recover biowaste, paper, and plastics with high levels of accuracy in the sorting process.

Once the organics along with the residues collected curbside arrive at the sorting plant it is fed into the facility. First, three of TOMRA’s AUTOSORT™ systems separate green bags from the remaining waste. Whereas the green bags are sent to a biogas site, where the organics are converted into biogas for refueling the plant’s collection trucks and bio-fertilizers, the remaining waste bags undergo further sorting steps. Different drum screens separate the materials by size before ballistic separators and 16 highly precise AUTOSORT™’s undertake a much more precise differentiation by material type. Thanks to the sensor-based sorting units’ advanced technologies including NIR and VIS, five different types of plastics (LDPE, HDPE, PP, PET, and mixed plastics), as well as paper, can be accurately separated from the infeed material. In the last step, magnets and eddy-current separators remove metallic fractions. All individual fractions generated are stored in bunkers and sold to European processors, who turn the materials into high-quality recyclates.

In 2014, the plant has already set itself ambitious targets, but looking back the combination of process optimization and the latest equipment has led to a considerable increase in the recovery of plastics and municipal solid waste. Moreover, whereas in 2014 sorting targets were set at 2,500 tons of plastics and 6,000 tons of organics per year, the capacity in 2021 reaches 3.600 tons for plastics and 11500tons for biowaste. Finally, since the automation of the plant in 2014, manual sorting efforts are no longer required, and personnel could be allocated to other tasks within the company. Looking at the long-term objectives, ROAF aims to build on its current achievements and the experience gathered to reach reuse and recycling rates of 70% in 2030. Its ambition is in line with the targets set by the EU which demand plastic recycling rates of 55% and those of municipal solid waste of 60% by 2030.

Tom Roger Fossum, Technical Director at ROAF, commented: “Since the beginning of our collaboration, we have been confident that we have chosen the right partners. Both TOMRA and STADLER have always been at hand and undertaken considerable efforts, using their synergies, and combining them with our local waste management experience to jointly realize the project. As results have shown, everything paid off.” Oliver Lambertz, VP and Head of Business Development at TOMRA Recycling adds: “I am accompanying the project right from the start and could see how initial thoughts and trials turned into a ground-breaking best-practice project. What we now see is an optimized waste management system, making the separate collection of plastics in this case redundant. At the same time, we could increase recovery rates and take most of our resources. Actually, very little is lost.”

ROAF and its system change can be seen as a best practice example for optimized waste management and recycling. Although this system is not applicable to all countries because of non-homogenous infrastructures, in this case the plastics and waste recovery rates are higher when plastics are not collected separately but together with organics and residues in the municipal solid waste container. But the success would not be as good without the proper technology. The combination of efficient waste management and advanced sorting technologies makes mixed waste sorting win the game in the South of Norway and ROAF ranks second in processing household waste by volume in Norway.

Making a difference and enabling change don’t come alone. It requires smooth and targeted collaboration, a common goal, and a vision. The Norwegian waste management company pursued the vision to level up recycling rates and exploit the full value of our resources before they are lost. To turn its ambition into reality, choosing the right partners became crucial. “Our goal was to automate waste sorting and optimize our waste management system considerably. We have been working with TOMRA for ages and have always been convinced of their technology, expertise, and service. They go the extra mile, partner to find the best solution, and support its implementation and ongoing process optimization. For us, there was no other way than collaborating with them again”, stressed Tom Roger Fossum. Finally, three purpose-driven companies in the sector, namely ROAF, TOMRA, and STADLER, joint efforts to turn ROAF’s visions into reality and show that there is not only one approach to efficient waste management and that collaboration is a door-opener when it comes to advancing recycling.

TOMRA Calls For Closing The Loop on Plastics and Beyond