Retailer Sports Direct acquired HSM machines at their Shirebrook headquarters to help manage their waste from across 1,000 stores across the UK where it’s arranged and recycled e­fficiently. Recycling plays a major part within the organisation’s corporate responsibilities. The company’s “strict” recycling standards means all UK stores are monitored closely ensuring there’s no cross contamination between recyclable materials such as wood, cardboard, plastics etc.

The Facility Manager at Sports Direct, Martyn Joyce, has been responsible for the management of waste in the company for more than 14 years. With around 800 to 1,000 tonnes of cardboard collected each month, due care and attention must be enforced at all times, especially with the large volumes of bales produced and the risk of cross contamination of the different waste materials. The organisation has its own on-site maintenance team who do daily, weekly and monthly checks. However, they also have a service contract with HSM who visit the Shirebrook site every six months to do all the major servicing, making sure the machines are fully functioning all year round. 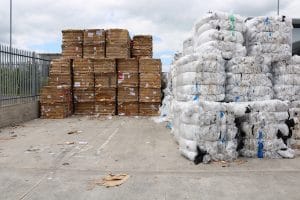 The relationship with HSM is more of a “partnership”, Martyn says: “We initially engaged with HSM when facilitating our original premises in Dunstable and as a consequence of HSM’s understanding of our specified waste processing requirements, we installed our first HSM automated machine. This machine served us exceptionally well ahead of our eventual relocation to a purpose built new distribution hub in Newark, Nottinghamshire.”

One of the key objectives for HSM was having a ‘real‘ understanding of Sports Direct’s operational requirements with solutions strategically located to handle waste ergonomically and conveniently, which had been either back-hauled from stores or generated in-house.

Sports Direct acquired its first HSM Baler in 2000, which ‘paid for itself in no time’, according to Martyn. One of the changes made more recently to this system was mainly for utilising a more efficient and sustainable “automated” recycling method to reduce the firm’s carbon footprint, rather than flat packing cardboard and placing it into open top skips.

The Shirebrook facility now contains nine HSM automated balers for cardboard and five V-Press models for plastic waste with the latter recycling up to 40 tonnes each month and around 480 tonnes annually. A total of 2,200 bales are produced on a monthly basis across all baler machines within the warehouse.

The popular entry-level “Mill Size” Model HSM VK 4812 automated baler incorporated an in-line feeding conveyor as part of HSM’s design. This ensured that the full working width of existing Sports Direct dock levellers was optimized and resulted in the creation of an exceptionally large charging area to enhance speed of loading, increased capacities and, above all, to achieve real labour savings by eliminating a need to tie-off bales manually. Some solutions within Sports Direct were further adapted to accept packaging via mezzanine gravity discharge chutes permitting two waste streams to be processed simultaneously.

From a logistical perspective, each baler is assigned to different locations within the distribution centre, to improve productivity and decrease downtime.

Akin to the cardboard and plastic balers, around 150 tonnes of Dry Mixed Recycling is put through the site’s balers each month, before being sent out to a third party who will, “recycle as much as they can- out of it”, according to Martyn. Martyn also remarks. “The cardboard boxes produced here don’t have any rubbish in them such as plastics or staples, so we’ve had no issue selling our products because of their great quality.”

“If any complications arise, HSM’s experienced nationwide service team will respond promptly. With 2,200 bales produced each month, this has helped to improve productivity and decrease downtime of the baling machines which are in continuous operation.“