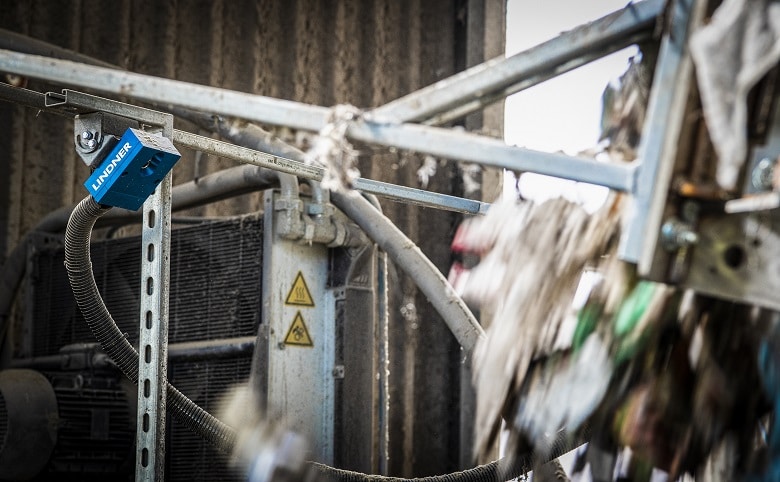 SPITTAL/DRAU - One of the most pressing recent issues in the mechanical processing and conversion of waste into solid recovered fuels (SRF) is the high fire risk. This is largely due to a constantly increasing number of lithium batteries in the general waste collection. If damaged, a chemical reaction is often initiated, which leads to incredibly high temperatures.

This may cause severe damage to facilities and plants and, in the worst case, start a major fire. To minimise such fire hazards, Lindner‘s FPS (Fire Prevention System) detects overheated particles in the material stream, cools them to a safe temperature and makes sure that objects that cannot be cooled can be safely removed by hand.

Whether smartphones, cars or toothbrushes – in today’s digitalised, mobile society it’s hard to imagine life without batteries. Billions of them are used for countless applications. According to the Austrian Chamber of Commerce’s information website ‘lithium-info.at’ (Austrian Chamber of Commerce, 2019), about 4,700 metric tons of rechargeable batteries are sold annually in the Alpine Republic, 40% of which are lithium batteries. Only about 45% of all batteries are disposed of correctly and, according to the University of Leoben, an estimated 1.4 million of them end up in the general waste collection every year (VOEB, 2019). The University also estimates that this figure will double in the medium term to 2.8 million (VOEB, 2019). Consequently, the risk of fire increases exponentially during mechanical processing, when converting waste into alternative fuels. Due to the technology used, lithium batteries, along with other highly flammable materials such as tar-soaked textile waste, have therefore become one of the most common hazards for serious fires.

Just like any other energy storage cell, lithium-ion batteries (LIBs) consist of an anode and a cathode, separated by a Li-ion permeable membrane and a non-conductive electrolyte. Energy is released when the ions flow between the two electrodes or is stored in the anode when over-voltage is applied. Compared to other technologies, lithium-ion batteries have one of the highest energy densities thanks to the very high working voltage that can be generated between the anode and cathode. Ultimately, this is the problem when the battery is mechanically damaged and short circuits. If mechanical processing bends or severs the cell this could destroy the separator, producing a short circuit. This causes the voltage between the poles to drop to zero, releasing the stored energy as heat at different points. Even with apparently run-down, used batteries, the remaining energy is so high that temperatures of over 600 C may occur.

Under certain circumstances this leads to an unstoppable chain reaction: the thermal runaway. The temperature spikes cause neighbouring cells in the battery to overheat and within milliseconds, to release their stored energy. This results in a fire or explosion that is almost impossible to extinguish. In this context it’s particularly problematic that the thermal runaway is delayed and cannot take place immediately after the mechanical damage. In SRF production this means a higher risk of fire throughout processing. The worst-case scenario is for the damaged battery to end up in the fuel storage bunker, where it could cause a devastating fire. Even if the battery burns by itself and doesn’t cause an explosion, the resulting temperatures are an enormous problem due to the fuel’s ignition point of 319 – 460 C (Lorber, 2010).

The continuous, process-related monitoring of surface temperature at several relevant points has proven to be highly successful in combatting potential fire hazards and actively improving safety in facilities that produce solid recovered fuels (SRF). Lindner’s Fire Prevention System (FPS) therefore sports optical sensors that constantly monitor the temperature on the conveyor belts and trigger a water sprinkling system to cool overheated particles in the material stream automatically. Thanks to the very early detection of these particles, most hazards are identified at the start of a thermal reaction keeping the required amount of water low.

Furthermore each unit has its own control sensor detecting objects that cannot be cooled, such as lithium-ion batteries where the thermal runaway has already been initiated. This triggers an alarm, stopping the conveyor belt under an active cooling nozzle so the hazard can be manually removed. Depending on the application the threshold value can be chosen freely. To counteract even a delayed reaction of the energy cells, it’s possible to install as many sensor pairs as needed depending on the size of the facility.

Lindner’s FPS is designed as a space-saving plug&go solution to facilitate the integration of the system in existing facilities. Its heated box version also makes it perfect for cold environments.

One of the first companies to try out this innovative solution was Mayer Recycling GmbH in Upper Styria, Austria. The data collected since mid-2019 clearly demonstrates the benefits of this sophisticated technology. Figure 2 shows the temperature on the conveyor belt during typical SRF production. On average, over 350 overheated particles in the material stream are detected per month. Of these, approximately 10% were still too hot for further processing, triggered the alarm and were manually removed. Of the removed materials, around 70% were batteries that were already undergoing a chemical reaction. The remaining system triggers were coolable materials such as metal particles that got too hot after shredding.