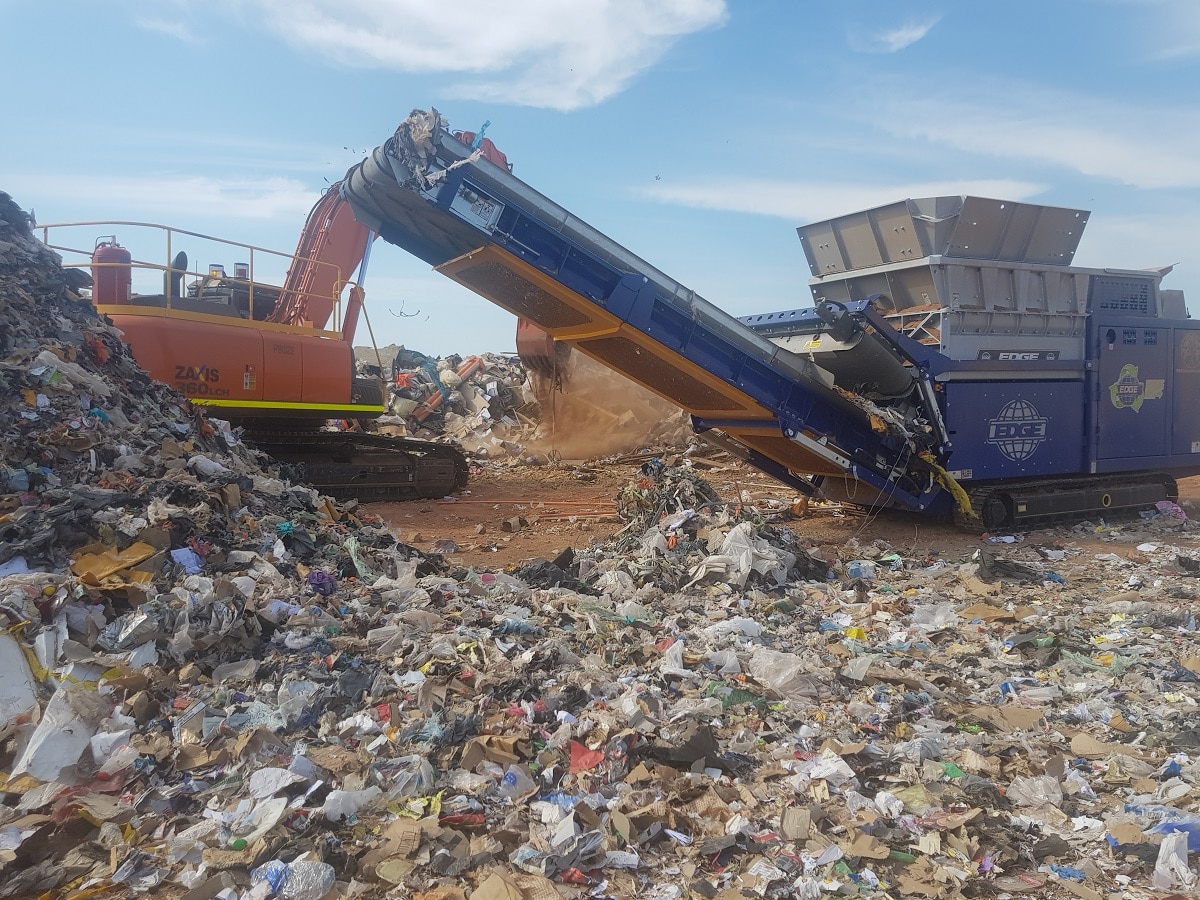 The City of Karratha in collaboration with FOCUS enviro have successfully completed an in-depth waste shredding trial.

Set over a three week period at the city’s 7 Mile Landfill Facility, the trial focused on the volume reduction percentages and the increase in storage density achievable by shredding various waste material along with the direct operational benefits of deploying a primary shredder. Those include labor, running, and maintenance costs of supporting machinery.

The City of Karratha provides residential and commercial waste disposal services at the 7 Mile Waste Facility. The facility is located approximately 10km west-southwest of Karratha and owned and operated by the City. With a small population of just 16,000 and many heavy industries close by; the landfill at 7 Mile Waste Facility receives a unique waste stream. Unlike many other landfills, 50% of Karratha’s waste receivables are bulky commercial and industrial waste with an above-average bulk density of 215kg/m³. The average landfill waste stream is predominantly made up of domestic household waste due to the large population cluster that tends to serve the landfill. These landfills have an average commercial waste density reported to be of a much lower density of just 161-185kg/m³. The unique waste profile received by 7 Mile waste facility has led to a number of challenges including a reduction in the landfill lifespan as originally projected as well as an unacceptable cost for running and maintaining the city’s fleet of landfill compactors. Original lifespan projections were based on a much higher material density than what is actually being achieved. Original projections did not take into account the bulky, abrasive characteristics of the waste actually received by the facility. With the lack of relevant data from other sources, the City took the step to undertake an intensive study in collaboration with FOCUS enviro with the aim of building a better profile of their waste stream and to gain a greater knowledge of the potential costs and benefits associated by introducing a waste shredding line into the treatment process.

An exclusion zone was set up to isolate the shredding trial from the daily operations at the tip thus providing a controlled environment for accurate data collection and prevent possible cross-contamination. An EDGE Slayer XL slow speed shredder was feed with various waste types that had historically proven to be troublesome for the landfills compactors. These were identified as being C&I waste, tires, HDPE, air filters, mattresses, and metal. Over a three-week period, the Slayer XL processed these troublesome waste types individually until each stockpile was completed. To measure the volume reduction and work out the increase in the bulk density of each of the materials processed; the stockpiles were surveyed before and after the shredding process. The data was then extrapolated to give bulk density readings based on the tonnage measured and the original volume or materials stockpile. This process was repeated once the material was shredded to provide comparable data.

The results in all cases as expected showed a reduction in volume and large density increases. However, it was the extent of the volume reduction that was of most significance. The overall total volume of all materials processed was reduced from 856m³ (Pre-shred) to 333m³ (Post-shred) prior to compaction. The overall average percentage reduction of materials by 61% would highlight and recommend the use of slow-speed shredding in this application where saving landfill space for the future, maximizing cell capacity, and reducing the reliance on landfill compactor operation/costs are the goals. In the case of 7 Mile Waste Facility, it is projected that the lifespan of the landfill would be extending from 2038-2054 (16 years) which itself, is a capital saving of approximately $7.8 million. The largest net earner from the process was the recovery of hidden ferrous metal from the general waste stream that traditionally have been lost. The EDGE Slayer XL was able to recover between 5-8T/day. The equivalent of $18,000 per month. Another notable post shredding benefit included the ease of handling and future compaction, reduction in litter, and reduction in rodent/bird interaction of the shredded material with a reduction in material cover required.

Morné Hattingh, Managing City Services – City of Karratha; “Choosing to upgrade an existing plant or designing a new facility to include shredding must be evaluated on a case by case basis to determine if the benefits are worth the additional capital investment and operating costs. Purchasing cost and Operational cost of a waste shredder may seem like a large increase but it should be kept in mind that by far the majority of the cost of operating a landfill facility is dedicated to paying back initial capital investment, which in our case, increase by less than 2% with the addition of shredding equipment”. The next step in this process is to look at what has not been measured and which will become the biggest peripheral benefit in the process of shredding at landfills is the savings realized from the reduced reliance on the landfill compactors.”

Edge Innovate are a blue sky thinking, imaginative and creative equipment manufacturing company. With our ethos of “Innovation at Work” EDGE persist in pushing the boundaries of design and manufacturing to produce hard working, quality machinery to fit any materials handling requirement from Recycling to Quarrying. The EDGE brand stems from a ...