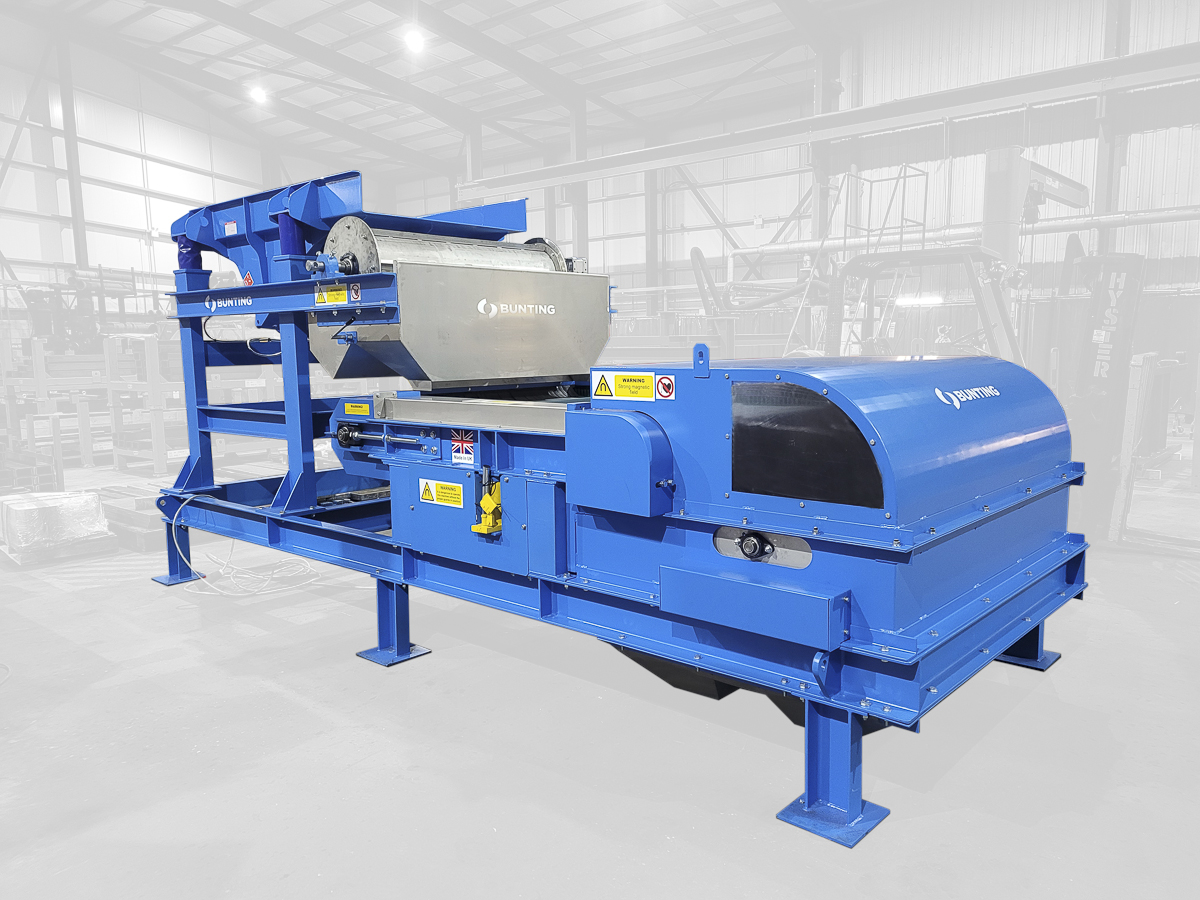 An aluminium dross processing plant in the Middle East has purchased an Eddy Current Separator, Drum Magnet and ElectroStatic Separator to recover the valuable metal. The separation equipment was designed and built by Bunting at their Redditch manufacturing facility in the United Kingdom.

Bunting is one of the world’s leading designers and manufacturers of magnetic separators for the recycling and waste industries. The Bunting European manufacturing facilities are in Redditch, just outside Birmingham, and Berkhamsted, both in the United Kingdom.

Aluminium dross is a byproduct of the aluminium smelting process.  After crushing, mechanical separation enables the recovery of residual aluminium from the aluminium oxide.  The first stage of the project involved Bunting conducting controlled material separation tests on three samples at their Customer Experience Centre in the UK.  Each sample had different particle size ranges.  The tests, undertaken on a range of laboratory-scale separators, confirmed the amount of aluminium that could be recovered by using three different types of equipment.

The test concluded that a three-stage separation process effectively recovered the metal from the dross.  The first stage of separation focused on removing magnetic particles with a high-intensity Rare Earth Drum Magnet.  Magnetics accounted for approximately 1%.  Removing the magnetics is beneficial to subsequent processing.

The Rare Earth Drum has a stationary permanent magnetic element mounted within a rotating non-metallic shell.  A vibratory feeder delivers an even and controlled flow of material onto the shell and into the magnetic field.  Magnetic particles are attracted to the surface and deposited in a collection area underneath the drum.  Non-magnetics flow in a normal trajectory and are recovered separately.

The tests concluded that approximately 15% of aluminum could be recovered from the dross using a combination of the three separators.

The production-scale equipment was sized to handle approximately 3 tonnes per hour of 1.5-20mm aluminium dross.  The particle-size range of the feed would be controlled to maximise separation performance.

In operation, the aluminium dross would feed onto a Vibratory Feeder, which would deliver a controlled flow of material onto a 1250mm wide 350mm diameter Rare Earth Drum Magnet.  After extraction of the magnetics, the material passes onto a 1250mm wide Eddy Current Separator with adjustable splitter.  The Vibratory Feeder, Drum Magnet and Eddy Current Separator are all mounted on one frame and operated through a single, separately located control cabinet. The remaining material is fed, in designated finer particle size range fractions, through an ElectroStatic Separator.  The 1000mm wide ElectroStatic Separator recovers fine aluminium unrecoverable on an Eddy Current Separator and features a control and adjustable splitter.

“As with many of our projects, we worked closely with the customer to understand and then confirm the separation capabilities of our equipment,” explained Adrian Coleman, General Manager of Bunting-Redditch.  “The combination of established and new separation technology has maximized the level of aluminum recovery.  The drive for most recycling companies is to recover as much clean metal as possible and with new technology, such as our ElectroStatic Separator, we are able to provide a complete separation solution.”

Bunting are world leaders in magnetic technology, magnetic separation equipment and metal detection systems for industry. Bunting have two manufacturing facilities in the UK and offices in Italy and Bulgaria. Our Berkhamsted facility focuses on supplying the full range of magnets, holding magnetics, ...

Recovering Metal with Bunting at IFAT 2022