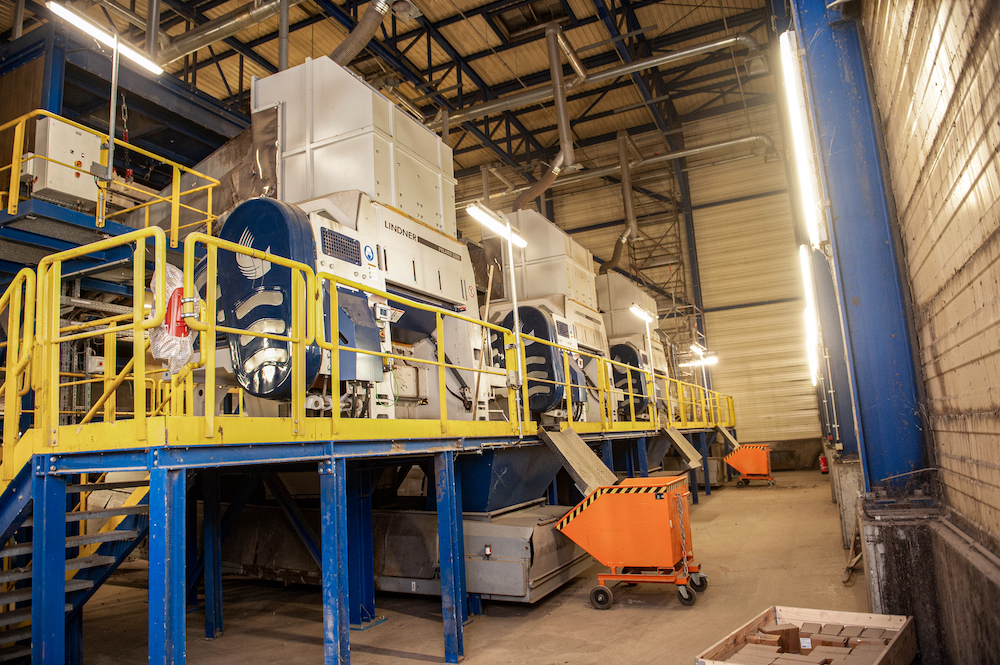 Nestled at the edge of the Lower Oder Valley National Park, the Schwedt power plant, which belongs to the EEW Energy from Waste Group, supplies the local paper industry with electricity and process steam. In line with circular economy principles, the plant recovers paper mill, commercial, and industrial waste. To optimally prepare the waste for the fluidized bed boiler, the company relies on quality from Lindner.

The high demands placed on calorific value and throughput require powerful and energy-efficient recycling machines. Therefore, in spring 2020, the Schwedt power plant decided to replace a stationary shredder that had synchronous technology and gearbox with Lindner’s Polaris 2200 and its tried-and-tested asynchronous technology, countershaft drive, and flywheel energy storage. The Polaris performed much better, offered improved technical availability, mainly due to its drive concept, and led the company to replace another two shredders in 2021 with Lindner’s Polaris 2200.

At the Schwedt power plant, a total of three Polaris 2200 shredders have been reliably and efficiently shredding 33 metric tons of waste per hour in three-shift operation over 5.5 days a week since 2021. This corresponds to 600 – 700 metric tons per machine every week. ‘We chose Lindner’s shredders based on the recommendation of another Lindner client and were not disappointed. The Polaris 2200 has an efficient cutting system and, after one year in full operation, has achieved a 30% higher productivity than machines with synchronous technology in the past,’ says Steffen Künkel, Production Manager of Postprocessing at the Schwedt power plant.

Not only is the Polaris 2200 extremely efficient but its heart, the rotor, is also highly accessible. This makes maintenance work quicker and provides easy access to the screen. Regular maintenance work is an important quality criterion and affects the homogeneous particle size and the consistently high throughput. At the Schwedt power plant, maintenance is planned so that it is only carried out on one of the three processing lines at a time. When one shredder is being maintained, the other two lines share the shredding load between them – the additional waste stream can be shredded seamlessly on the two Polaris 2200s that remain in operation. The countershaft drive system harnesses the flywheel energy storage, which significantly reduces the acyclical power required by the electric motor and also provides the additional power reserves required during peaks.

Generally speaking, the Polaris can be used for a variety of applications. Although the material delivered to the Schwedt power plant is predominantly free of FE parts, the input material might still contain unwanted and difficult-to-shred objects. The robust shear cutting system is, however, resistant to non-shreddables, which in turn positively affects the throughput. In terms of output material, the Polaris can achieve three-dimensional particle sizes from 40 to 120 mm in a single pass. For the Schwedt power plant’s fluidized bed kiln, it produces a particle size of 80 mm. Commercial, industrial and waste wood used to fire calciners in cement plants is also shredded to the same size. That’s another popular application of Lindner’s Polaris series.

‘We enjoy working with Lindner, especially with the project department as power plant standards need to be incorporated at the design and documentation stage. Also, the dismantling of the old machines, the installation of Lindner’s shredders and commissioning were flawless,’ says a delighted Künkel.