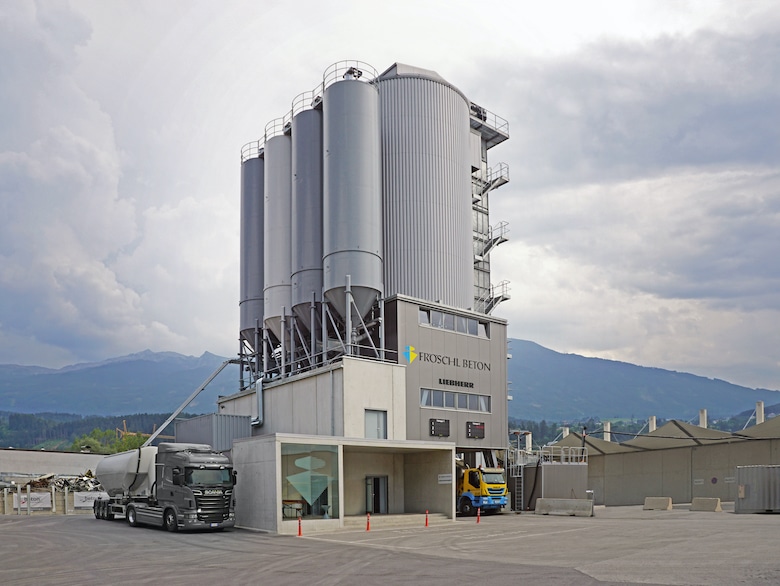 One of Austria's most modern concrete mixing plants has been proving its worth since spring 2019. The Liebherr Betomat-type mixing tower was optimally adapted to customer requirements. With the new mixing tower, the Fröschl Beton company is ideally positioned for the future.

The Fröschl Beton company has been supplying construction sites in the Innsbruck area (Austria) with ready-mixed concrete for many years. Their 45-year-old mixing plant was technically obsolete and no longer met the standards of today. The wishes and requirements for the replacement purchase were high: Today and in the future, it was supposed to cover the entire concrete logistics chain and deliver flawless concrete efficiently and flexibly.

After an extensive planning phase, Liebherr’s Betomat concept was chosen because it enables the operation of two completely separate mixing plants within one mixing tower. The compact design of the two weighing and mixing lines as well as the Liebherr quality and service were compelling.

The Betomat holds up to 600 m³ of stone in nine silo chambers. The mixing tower is fed with aggregates via two charging hoppers and a powerful bucket elevator with an hourly output of 200 m³/h. The plant has seven silos for a binder supply of around 840 tons.

The new mixing plant is equipped with two mixer systems: a ring-pan mixer with an agitator system and a double-shaft mixer. This means that normal standard concretes as well as high-performance and special concretes can be produced very efficiently. When in operation with both mixer systems, the plant achieves a possible output of around 160 m³ of compacted fresh concrete per hour. The tower is equipped with two lanes. Thanks to the separate weighing lines, two vehicles can be loaded simultaneously with different types of concrete – making the mixing plant highly efficient and flexible.

The environment and recycling also play an important role at Fröschl Beton. For environmentally-friendly operation, the housing and exhaust air filter systems reduce dust emissions. Noise emissions are also minimized. Residual concrete quantities from the truck mixer and plant cleaning, as well as re-concrete quantities, are processed in the LRS 908 residual concrete recycling plant. Washed-out material and residual water can be returned to concrete production. This enables considerable cost and material savings. The longevity of the plant is ensured not only by high-quality components but also by a precisely fitting steel construction from the Liebherr plant in Bad Schussenried. To ensure smooth operation even during the cold winter months, the entire plant is insulated with a 100 mm insulated wall and equipped with heating.

This article is published by
Liebherr-International Deutschland GmbH
The decentrally organized Liebherr Group comprises eleven company units. The highest management organ is a shareholders' committee composed solely of members of the Liebherr family.