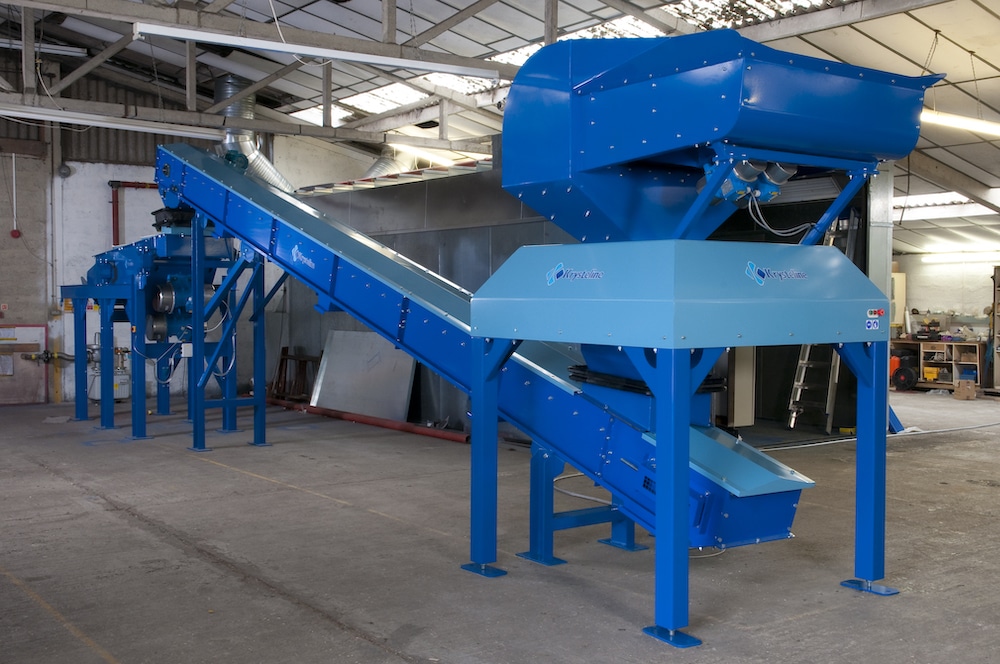 The second largest Channel Island of Guernsey, a mere 78km² in area, is rapidly running out of space; its last landfill site, Mont Cuet, is scheduled to be full in 2022.

The continuing fear of high costs when disposing of waste at sea or when shipping back to the UK led to the development of a new strategy for recycling their own glass. Krysteline offered a cost-effective answer. The aim of the project was to seek a long term solution for their waste problem that would protect the natural biodiversity of the island by avoiding the creation of new landfill sites that could endanger native species. If possible, the project also wished to explore the option of using recycled glass as an aggregate in order to produce revenue.

Initially a GP4 machine was purchased from Krysteline, but as it is a small machine, new spare parts were frequently sought in order to supply their recycling needs. Krysteline were eager to solve the problem and sent a member of their team on a personal visit to investigate. The GP4 was deemed undersized for its purpose, especially as there had been an increase in the island’s household and business recycling.

A new GPK300 replaced the old machine. This system can process 6 tonnes per hour and work for 4 to 5 hours a day, with three products;

The Imploder was provided with an integrated feeder hopper, modular belt conveyor and taper slot screener for the processing and segregation of glass into two sizes of cullet and separated non-glass waste.

Since 2011, by collaborating with the local quarry, glass crushed at this site has been used in aggregate on the island. By using glass cullet, they reduce a proportional amount of imported sand, thus decreasing shipping costs. These aggregates have been used in building houses and constructing roads. Minister Bernard Flouquet said “Shipment to the UK is expensive… Using recycled, crushed glass as an aggregate substitute for roads is a tried and tested method and would also help the natural environment by reducing the energy pollution involved in transporting the glass” (Guernseypress.com).

The glass recycling project is part of Guernsey’s wider recycling plan in order to protect their environment against growing waste and prevent new landfill sites. The collaboration with Krysteline has not only proved effective in reducing the volume of waste, it has created an investment that continues to generate money for Guernsey’s economy.

Krysteline is a provider of innovative solutions to the materials processing industry. Principally using its Implosion systems; developed for efficient and cost effective size reduction of glass, ceramics, minerals, ores and furnace slags. The Patented Imploder transfers energy into the target feed stock whilst exerting a limited effect on associated ...

The Realities of Glass Recycling