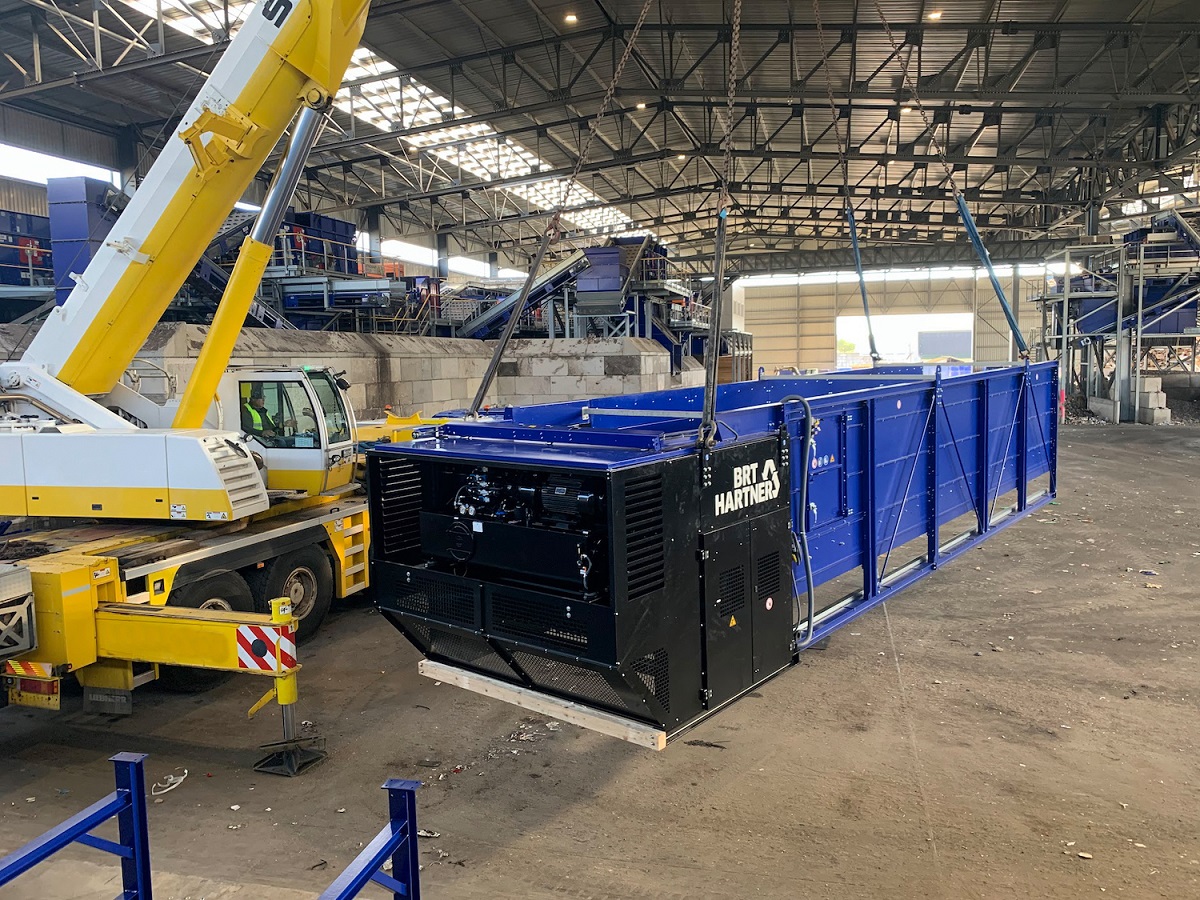 Chavelot, 15th November 2022. At the end of October, probably the largest bag opener in the world went into operation in Chavelot. The machine is a special production at the request of a long-standing customer. However, the actual special characteristic is not its size, but the use of a new standard with segmental construction.

BRT HARTNER has been manufacturing bag openers since 1993 and has sold over 700 machines worldwide to date. The new bag opener in France, however, is the first with a 20-metre long bunker. With the additional use of hopper height extension sheets, it has a total filling volume of 90 m³. The machine, which weighs almost 25 tonnes, was delivered in two parts and connected on site. This meant that no special transport was necessary.

“For more than a year, we have been designing and manufacturing our bunkers in segments of four and six metres in length. By varying these elements, we can serve bunker lengths in two-metre increments. Even subsequent extensions of already delivered bunkers are possible, All bunkers are equipped with robust steel moving floor conveyors. Optionally, the hoppers are supplemented by bag opening, dosing or bale breaking units.”

The bag opener in Chavelot is designed for a capacity of up to 250 m³ per hour, with BRT HARTNER assuring a bag opening rate of at least 95% despite the high throughput. For maximum utilisation as well as optimal results, the bunker must reliably and continuously supply the bag opener with material.

The large volume offers a decisive advantage here: once filled, the bunker supplies the bag opener and thus the downstream system with material for about half an hour. This long supply time allows for employees and floor vehicles to be used for other tasks. This helps the customer to relieve the personnel and to reduce costs. To prevent the system from running empty, an integrated fill level monitoring system sends optical-acoustic signals as soon as the bunker needs to be filled again.

“In France in particular, we are observing an increasing demand for ever larger feed bunkers. With the segmental construction, we are the best supplier to meet this demand. We will probably therefore deliver more bag openers in similar sizes in the future” Simonsen is sure.

The bag opener was commissioned by the company CITRAVAL. CITRAVAL belongs to the Schroll Group, which has been active in the recycling industry since 1892. The long-established company had already relied on large feed and dosing bunkers from BRT HARTNER for its sites in Strasbourg, Colmar and Pfastatt. The current project in Chavelot was handled by the French BRT HARTNER sales partner AB-SOLU.

The Eggersmann Group, based in Marienfeld in East Westphalia is an association of companies at a national and international level with business operations in the areas of “construction”, recycling” and “composting”. About two thirds of the approx. 900 employees are located at the 13 German locations while one third are spread over the international ...

XXL Rotting Tunnels By Eggersmann For Composting Plant in Luxembourg

Composting of Farmyard Manure with the BACKHUS Compost Turner from Eggersmann