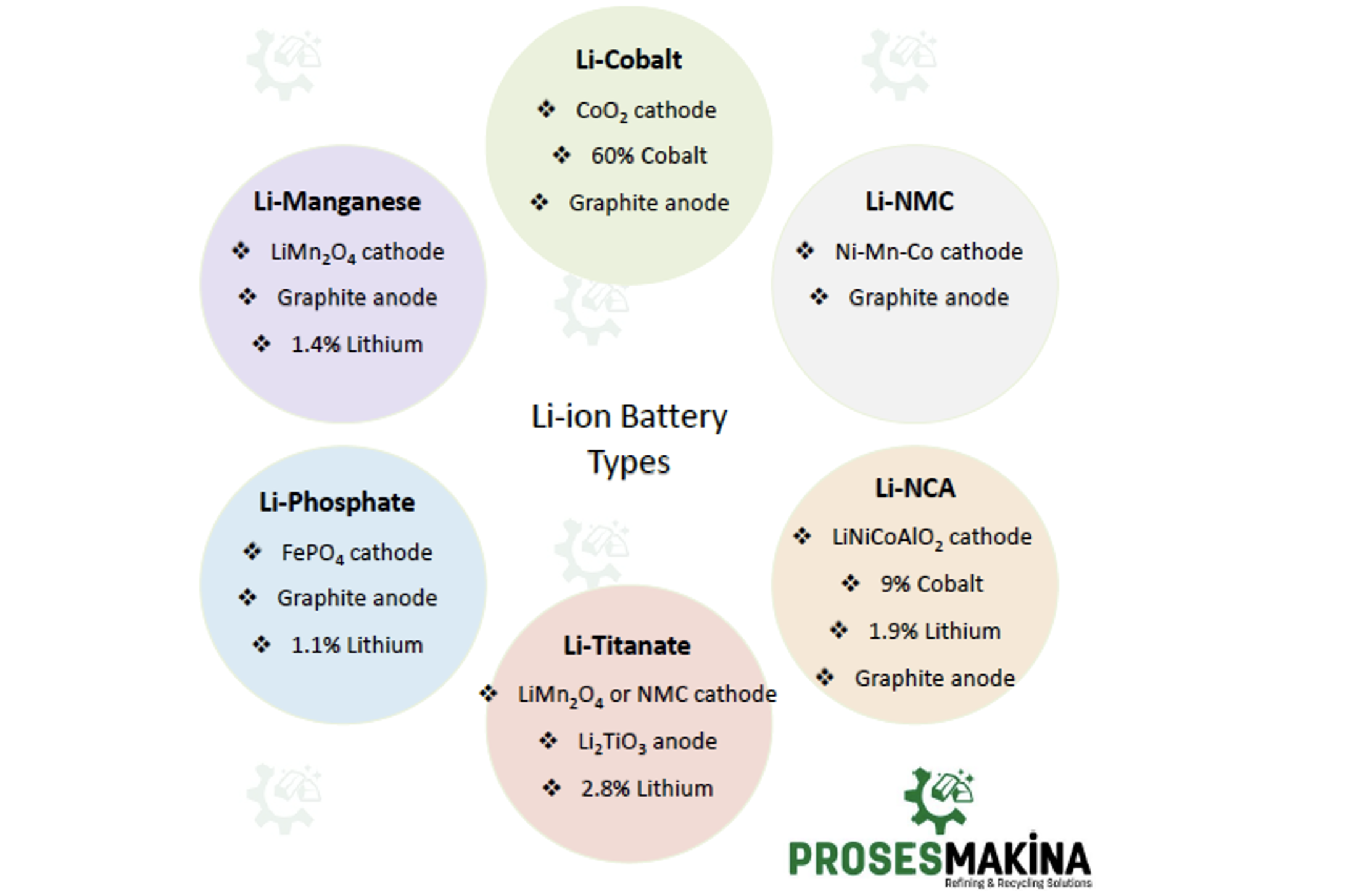 Lithium metal oxide structures include cobalt, manganese, and nickel metals. The presence and proportion of these metals vary according to the type of battery and where it is used. Lithium metal oxides come in forms such as LiCoO2, LiMn2O4 and Li (NixMnyCoz) O2.

Lithium ion is named because of its active ingredients.

Li-cobalt battery is used in cell phones, tablets, laptop computers and digital cameras. The battery consists of a cobalt oxide cathode (about 60% Co) and a graphite carbon anode. The disadvantage of Li-cobalt is a relatively short life, low thermal stability, and limited load capacity.

Newer systems that contain nickel, manganese and / or aluminum to improve longevity, loading capacities and cost.

Li-manganese is used for power tools, medical devices, electric powertrains, hybrid, and electric vehicles. Li-manganese has high power but less capacity than li-cobalt but safer. It is often mixed with NMC (lithium nickel manganese cobalt oxide) to improve its performance. This combination brings out the best in each system and the LMO (NMC) is chosen for most electric vehicles such as the Nissan Leaf, Chevy Volt, and BMW i3. The LMO part of the battery, which can be about 30%, provides high current boost on acceleration; the NMC part provides the long driving range.

While pure Li-manganese batteries are no longer common today, they can only be used for special applications.

Similar to li-manganese, these systems can be adapted as Energy Cells or Power Cells. NMC’s success is due to the combination of nickel and manganese. Nickel is known for its high specific energy but poor stability; manganese has the advantage of forming a spinel structure to achieve low internal resistance but offers a low specific energy. Combining metals increases each other’s strength.

NMC is the battery of choice for electrical equipment, electric bicycles, medical devices, EVs and other electric powertrains.

Its field of application is portable and stationary need, high load currents and durability. Very flat voltage discharge curve, but low capacity. One of the safest Li-ions. It is used for special markets. Elevated self-discharge. It is primarily used for energy storage.

Li-titanate replaces the graphite in the anode of a typical lithium-ion battery. The cathode can be lithium manganese oxide or NMC. The cycle count is said to be higher than that of a normal Li-ion. Li-titanate is safe, has excellent low temperature discharge properties.

Lithium-ion batteries contain precious metals and other materials that can be recycled, processed, reused, and critical to reserve. But the recycling rate is very low. Proses Makina Company’s R&D studies continue to improve the lithium-ion battery recycling system and make it more efficient.

Electric Vehicle Batteries Recycling: What are the challenges and solutions?

What is the Shaking Table?