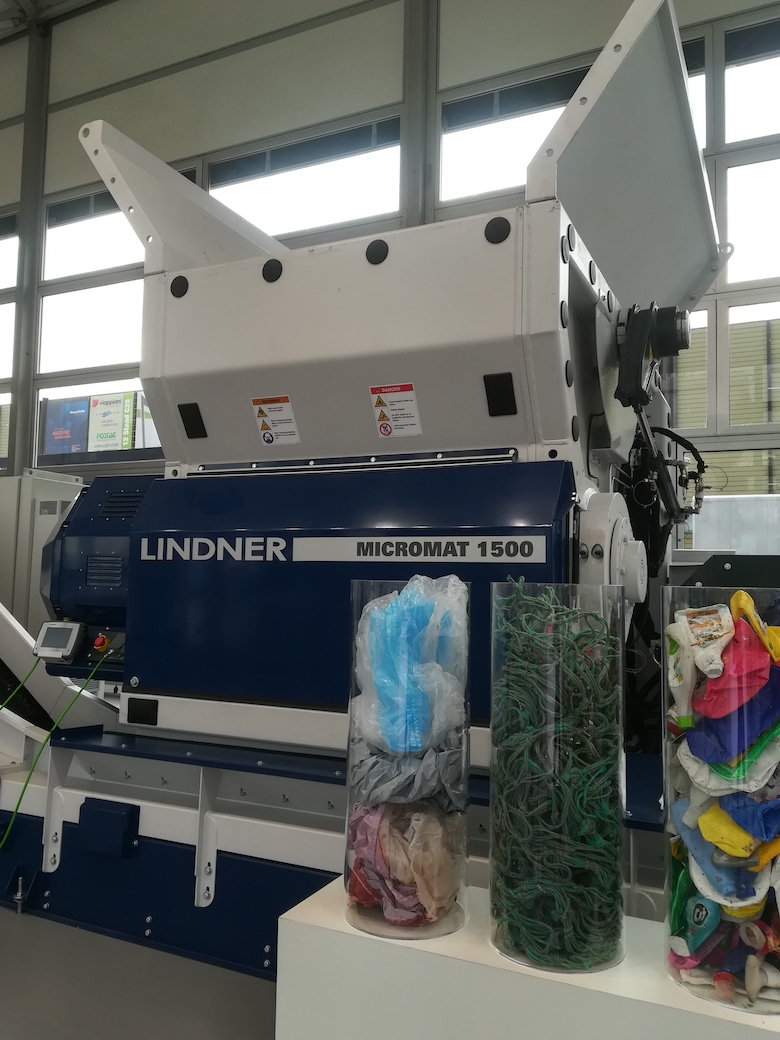 The Lindner Micromat is a top seller in the plastics shredding market. At K 2019 the next generation has been presented along with an additional model and a new and improved universal cutting system. The shredder has been displayed live and in colour in the outside area.

Walking through the outside area of K 2019 this year, for the first time visitors saw a tent for live demonstrations by the Austrian specialist in shredding technology and recycling systems, Lindner Recyclingtech and its subsidiary Lindner Washtech.

‘The cycle starts here’ is written in large letters above the entrance. And as soon as visitors have passed it, its meaning immediately becomes clear. In terms of processes, the mechanical recycling of plastic waste always starts with shredding at the recycling companies. Which is precisely why Lindner was demonstrating the new Micromat 1500 shredder.

Based on Lindner’s tried-and-tested technology, the Micromat series has been further optimized to meet current market demands in the plastics industry. And with the 1500 size – meaning a rotor length of 1500 mm – a new entry-level model from the Micromat series has been created. But that’s not all. The most innovative feature is without doubt the new Multiplex cutting system. Thanks to the three-dimensional arrangement of the rotor knives, this exceptional system can shred almost any plastic. As a result of the knives actively pulling in the material, the output can realistically be increased by some 40 percent on average compared to previous technologies. Stefan Scheiflinger-Ehrenwerth, Head of Product Management at Lindner, explains: ‘During development, we tested a wide range of materials together with our clients and optimized this cutting system’s geometry to cover as many types of plastic as possible. The long-term test finally revealed that the new Multiplex rotor not only increases the throughput enormously but in some cases even multiplies it.’

In addition to mechanical improvements, the machine’s software and controls were redeveloped from scratch. With the new Lindner Mobile HMI (Human Machine Interface), the manufacturer is reacting to the growing shortage of skilled workers and focusing on extremely simple, self-explanatory menu navigation. The mobile control panel can be placed at the front or rear of the shredder depending on the task at hand, for example, a screen exchange. Moreover, the touchscreen-only displays the relevant functions.

With the new control software, the shredder is able to communicate with downstream equipment in the process chain and, for example, function as a dosing unit for the facility or pass on data about the materials’ quality to the extruder.

With the Micromat HP series, Lindner is launching a shredder that is specially designed for shredding post-consumer and industrial film. Equipped with a direct belt drive that enables rotor speeds of over 300 rpm, these new machines can produce up to 2.5 times more output than the basic version in this area of application.

Furthermore, the new cutting system is able to precisely cut plastics into flakes for cleaning, sorting and subsequent extrusion in just a single step. The advantage of this feature is that additional fine granulation is unnecessary, meaning that energy and maintenance expenditure is significantly reduced while simultaneously lowering investment costs.