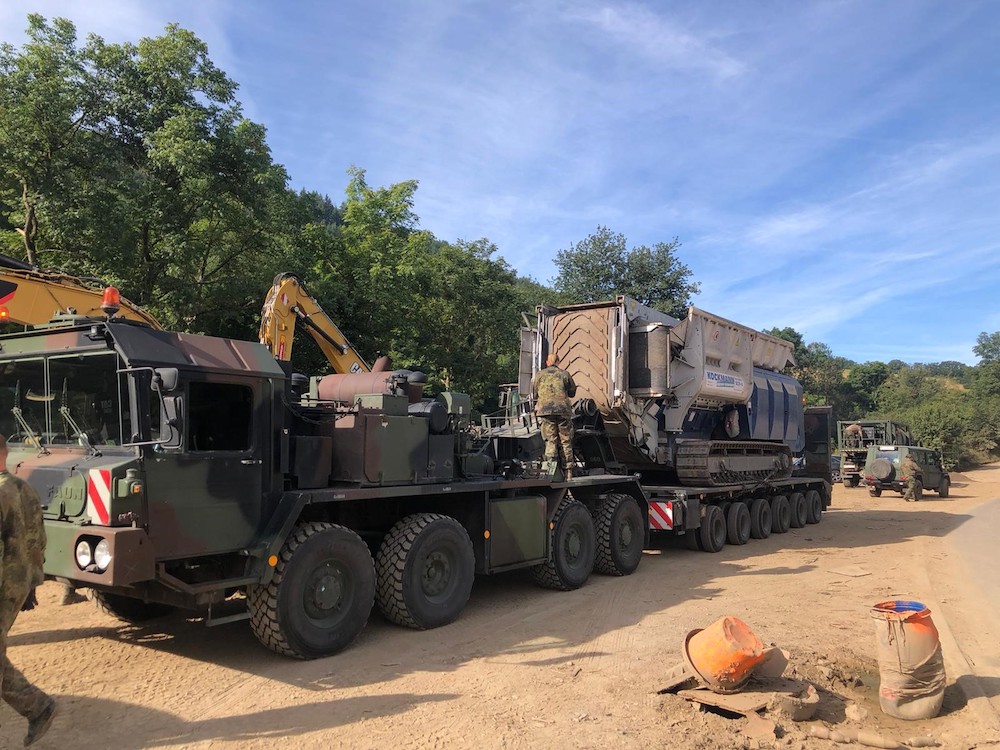 A flood wave of epic proportions caused unprecedented destruction in the German Ahrweiler district in mid-July this year. Using Lindner’s mobile Urraco 95DK universal shredder, the Kockmann company supports the clean-up efforts on the ground. For this very special mission recycling specialist Lindner contributed the rotor, the beating heart of the shredder, free of charge.

About a month ago, the Ahr river burst its banks and sent water surging through the local area, causing great destruction. More than 140 people died in the flash floods, at least 17,000 lost everything they had. When the disaster-recovery workers arrived on the scene, they were confronted with a picture of utter devastation. Bulky waste clogged the streets and alleys, mountains of driftwood piled up on the banks of the Ahr, meadows, and former sports facilities.

Many volunteers come to support the hard-hit population. Among the helpers are the waste management company Wertstoff- & Recyclinghof Kockmann from Ochtrup, 250 km away. CEO Martin Brinkschmidt personally delivered Lindner Recyclingtech’s Urraco 95DK to the area devastated by the Ahr.

‘That’s more or less how I imagine a war zone to be,’ says a deeply affected Martin Brinkschmidt after his arrival at the flooded area. He reports collapsed houses, washed away bridges, and lots of rubbish. ‘There is a lot to do. We are dealing with the mountains of driftwood. Lindner specifically sent us two technicians to personally install the powerful and robust LW-10.10 twin-shaft cutting system, which is also perfectly suitable for bulky waste wood.’

‘When our customers set out to help in a disaster area, we are more than happy to support them,’ says Wulf Schellwanich, Sales Manager at Lindner Recyclingtech. ‘Our Urraco mobile shredder is inherently versatile and can be used for wood, waste wood, metal, and bulky goods. Each material has different requirements and the twin-shaft cutting system we install in each Urraco is adapted to the specifics of the input material. In the beginning, we didn’t know how to best support the disaster relief efforts on the ground. When the Urraco was called in to shred driftwood, we immediately dispatched an installation team to make the shredder fit for the specific requirements.’

This twin-shaft cutting system is incredibly resistant to non-shreddable, which is critical in situations like these. The driftwood in the flooded area is mixed up with mud and stones as well as materials such as mattresses, metal grates, and other objects that were washed out of cellars and living rooms. The specifically designed pull-in rippers ensure that the material is shredded with maximum efficiency. These rippers pull the material into the rotor with special hooks, achieving continuous material feeding and a consistent throughput quality.

‘The material we shred is very special, heavily soaked, muddy, and rich in minerals. In terms of power and performance, this is not a challenge for the Urraco. We shred more than 50 metric tons of material an hour,’ says a satisfied Brinkschmidt ‘and we do that 12 to 14 hours a day, 7 days a week.’

Although the clean-up has been in full swing for over a month, the Kockmann employees will probably remain on site with the Urraco for another two to three months and support the disaster relief in their clean-up efforts.