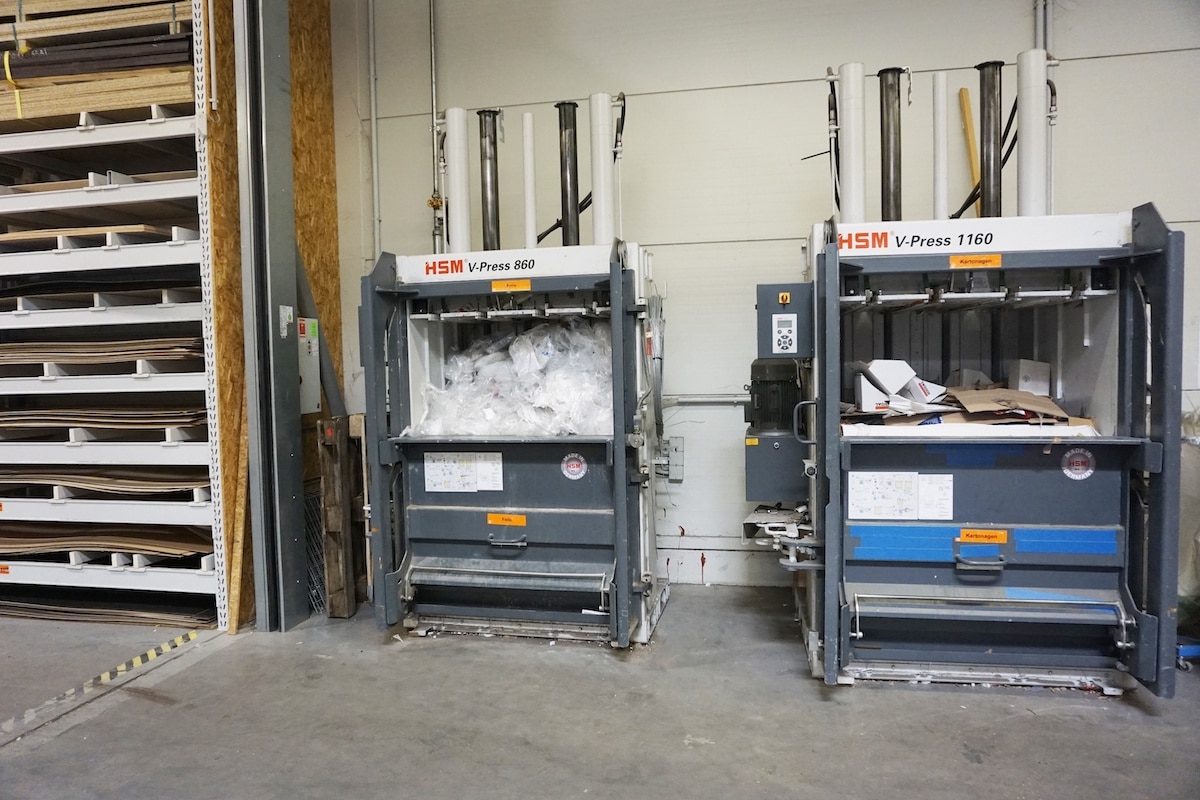 Hornbach Baumarkt AG is optimising processes within their DIY megastores and garden centres with a waste management concept and, in doing so, is also earning money by disposing of the recyclable material which is generated.

The heart of the innovative concept: vertical balers from HSM. 330 of the HSM V-Press 860 and HSM V-Press 1160 max balers compact paper, cardboard and film at 180 points of collection – megastores and logistics and administration centres in nine European countries. The investment for the balers is paid off within a very short period. The concept, said Andreas Back, Head of Quality Management, Environment & CSR at Hornbach, has increased the recycling quota dramatically: “A lot of residual waste has become recyclable material.”

Many products that can be bought at a Hornbach DIY megastore arrive at the store in packaging. It is the employees’ task to unpack the goods when they arrive at every DIY megastore. In doing this, a lot of packaging material is accrued. Prior to the use of the baling presses at Hornbach, paper, cardboard and film were simply thrown away. Roll-off containers pressed the waste material, the disposal company collected it. “Many fractions were mixed in a residual fraction and the disposal also costs money. The options for recycling were, quite simply, not extensively used”, reported Andreas Back. “Sometimes, up to 70 percent of our waste was recyclable material.” In 2010, those responsible at Hornbach recognised that there was significant potential for optimisation in these processes. They obtained information at recycling trade fairs about the methods of disposal and suitable machinery.

The objective was a waste management concept that foresaw waste separation and a container registry for more transparency. Additionally, the journeys within the incoming goods areas of the DIY megastores and garden centres were to be optimised so that employees could work more effectively. Disposal of the recyclable material was to become independent of a recycling partner. It quickly became apparent to Andreas Back and his colleagues at the Hornbach Headquarters in Bornheim (Palatinate/Germany) that for this concept, compaction machines were required which could press the recyclable material directly into marketable bales, whilst simultaneously taking up as little of the valuable space within the incoming goods area as possible. The machines should have a high pressing power, a long service life, and the manufacturer must have a close-knit service network available to them. Andreas Back: “In the event of a repair, we need a solution within 24 hours, anything else would hold up operations and cost too much money.”

Those responsible at Hornbach tested a variety of baler models from various manufacturers in a DIY megastore. In doing so, they very quickly saw “clear differences” in ease of operation, quality and lastly, the price, reported Andreas Back. The “highest quality” and the “best price-performance ratio” were exhibited, in his opinion, by the HSM presses. Back: “We simply had a very good impression. The complete package at HSM was right.” The vertical balers from HSM had a high pressing power, required little space, were simple to operate and were “very unobtrusive” in continuous operation. Hornbach subsequently equipped its stores in nine European countries and several of its logistics centres with baling presses from HSM. Currently Hornbach has over 330 HSM presses. The employees in the incoming goods areas of the individual stores fill the machines with the packaging material, press it and store it in bales. Once a week, one of the Hornbach lorry fleet (“Recyclable Material Liners”) collects the valuable product and takes it to a transshipment centre where the recyclers take it over. “Recyclers value the Hornbach material due to its high quality and the degree to which it is sorted”, reported Andreas Back.

With the vertical HSM baler, you become independent of the collection cycles, Andreas Back praised. The employees can independently take bales from the machines and put them into interim storage. That Hornbach‘s Recyclable Material Liner fleet is also clearly visible as such, is a sign to the disposal market that Hornbach is serious about all matters that concern recycling.

Hornbach had additional requirements for the HSM presses: because there is often wet film in the megastores, it was requested that the press chamber had a strong protection against corrosion and there were also specialist requirements for the software. To begin with, Andreas Back reported, the employees and megastore managers first had to get used to the new presses. Reason: the roll-off press containers had larger loading apertures. The advantages of the HSM machines became quickly apparent and the megastore managers and employees were satisfied; so much so that Andreas Back heard a megastore manager saying: “I‘m not going to let them go.” The employees are easily able to operate the presses.

A great advantage of the vertical baling presses from HSM is their mobility. If the incoming goods are reorganised, the machines could be easily installed at a new location, said Back. After many years of collaboration, he is drawing an “absolutely positive balance” regarding the service quality of his press manufacturer. “We can always reach our contact partner and are always helped quickly without any problems.” The reorganisation on the basis of the HSM products at Hornbach is also a success in the eyes of management. Today, Hornbach delivers approximately 12,000 tonnes of paper and cardboard, and 3,000 tonnes of film to their recycling partners. In doing so, the DIY company redeems hard cash. According to the information provided by quality managers, the investment pays itself off within just a short period. Back: “We have quickly achieved the ability to make what would have been residual waste into a recyclable material.” It has been possible to significantly increase the recycling quota across the whole company.

Back and his colleagues have also optimised the handling of recyclable material with the online Hornbach-Recycling-Portal: it is here that the material flows are registered, controlled and invoiced to the recycling companies.

Those responsible at Hornbach are proud of their currently unique disposal concept and of their pioneering role within the industry. Andreas Back announced that the company would continue working on maintaining this advantage. HSM will continue to play a significant role in this. The DIY store specialists are satisfied that they have produced a successful concept with the correct press manufacturer.

“With hindsight we can say that it was absolutely the correct decision to go with the vertical baler and HSM, and to be the pioneers within the industry with our concept. We are going to develop this even further.”

Company
The HORNBACH Baumarkt AG operates around 160 stores in nine European countries. Founded in 1877, HORNBACH is the only company in the DIY sector which can reflect upon six generations of longlasting family history.