BCA Industries was formed in 1998 by twin brothers Doug and Joe Bartelt in North Lake Wisconsin.

Their father Robert Bartelt was an inventor and entrepreneur all his life holding several US Patents and being principle designer and one of the original founders of Bruno Independent Living Aids. Bruno makes lifts for scooters and stairway elevators. If you’ve ever seen a scooter being automatically lifted into a car or van you are probably looking at one of Robert Bartelt’s designs.

Growing up welding, fabricating and designing machines the Bartelt brothers started BCA Industries. From a garage making exotic auto parts and custom assemblies to a 23,000 sq. ft. facility on 3.5 acres BCA now is located in Milwaukee Wisconsin “The Machine Shop of the World”. From all custom machining and fabricating for many of the area’s top manufacturers to developing their own product line and product development department BCA has continued to grow and service its most technically demanding customers.

BCA has a commitment to servicing these industries with well built products “Designed, Machined and Assembled” in the USA. New product and process ideas flow through the arteries of BCA. 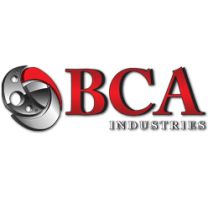